'Silent killer' as treatment for heart and lung disease

Researchers have used carbon monoxide to reverse the effects of pulmonary arterial hypertension.

Carbon Monoxide (CO), a gas once dubbed the ’silent killer’ by the UK’s health and safety executive, could provide a life-saving treatment for an incurable lung and heart condition, report researchers at Harvard Medical School, US. 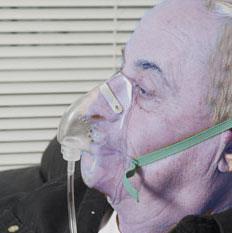 ’People with the disease initially go to their doctor because they are having difficultly breathing, but by the time they are diagnosed it’s too late,’ said Leo Otterbein, lead author of the study. ’At this stage the disease has progressed too far and is fatal.’

Drugs currently available for PAH treat the symptoms rather than the disease. Vasodilators including Revatio, a repackaged version of Viagra, are given to patients to increase blood flow to their lungs. Otterbein’s previous unpublished work had shown that CO reduces vascular inflammation in the liver, persuading his team that it might prove a useful treatment for PAH.

The researchers used a mouse model of PAH and found that daily, low concentration doses of CO inhaled by the mice reversed the disease. The CO treatment restored blood vessels and the heart to their normal size by arresting the growth of smooth muscle cells and by inducing apoptosis (programmed cell death). Otterbein described the process as ’retro-remodelling’.

The results also showed that CO selectively destroyed the ’problematic’ smooth muscle cells. Further study confirmed that this discerning action of CO on proliferating smooth muscle cells was dependent on the presence of nitric oxide (NO), a well-known vasodilator, released by the endothelial cells that line blood vessels, and already widely used clinically.

Dimitris Grammatopoulos, a biomedical scientist from Warwick University, UK studies the effects of NO on pre-eclampsia, a condition causing high blood pressure during pregnancy. He told Chemistry World that this research supported the evidence for the use of CO in other hypertensive conditions.

’Although initially this would be used as a hospital treatment,’ said Otterbein. ’I could see the potential for this drug to be taken home by PAH sufferers and used in the same way that asthma patients use their inhaler.’A small-scale human clinical trial has begun in the US.