Silicon circuits do the twist

Silicon circuits that can be bent, stretched and twisted without breaking or losing their electronic properties have been developed by US scientists. The bendy circuits could be used to make wearable medical sensors or ’smart’ surgical gloves, the researchers say.

The circuits are composed of nanoribbons of single crystalline silicon. They’re made using transfer printing techniques similar to those already used by the silicon industry, but modified to yield ultrathin circuit sheets with a total thickness of about 1.5 micrometers - 50 times thinner than a human hair.

These ultrathin circuit sheets are then bonded to a prestretched piece of rubber. Allowing the rubber to snap back to its original size makes the circuit sheet buckle like an accordion’s bellows. These compressed circuits (see link to video below) can then be bent or stretched with no ill-effects. 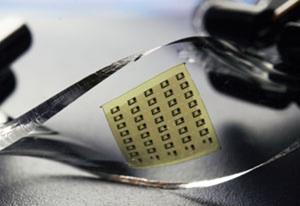 The circuits can be used to build transistors, amplifiers and logic gates with electrical performances as good as those on brittle semiconductor wafers.

John Rogers of the University of Illinois at Urbana-Champaign, who led the team, says the circuits could have many new applications for which conventional wafer-based systems are unsuitable. ’We think that the most promising initial applications are those that involve the integration of electronics and sensors with the human body,’ he says.

In cooperation with other research groups, Roger’s team is now working on developing stretchable electronics that lie on the surface of the brain to monitor patients that suffer from epilepsy. They’re also looking at how to incorporate sensors and electronics into surgical gloves to provide the surgeon with additional information during an operation.

’This is the most significant advancement towards commercially realizable flexible electronics to date,’ says Michael Strano of the Massachusetts Institute of Technology, US. However, the circuits must be made from different materials if they are to be used in the body, Strano says: ’The materials used in this work are not compatible with human tissue implantation or protein adsorption. Nevertheless, for more conventional applications of flexible electronics, the work is a clear advancement.’