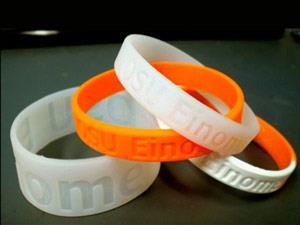 You might soon be able to detect which chemicals you’re being exposed to by wearing a silicone wristband like those made famous as a fundraising tool for the Livestrong cancer charity.

MyExposome, based in Oregon, US, has used technology developed at Oregon State University (OSU) to create such a product, which it now wants to move out of the laboratory. The researchers behind the company, including co-founders Steven O’Connell and Kim Anderson, have initiated a Kickstarter online fundraising campaign to develop the wristband, which can currently measure more than 1400 chemicals. The Kickstarter has attracted 35 backers so far that have contributed a total of $8764 (£5600) toward a goal of $50,000.

Besides being practical to wear, silicone is ideal for passive sampling because it is good at absorbing a wide range of chemicals from hydrophilic caffeine, to more hydrophobic organic contaminants like polychlorinated biphenyls, polycyclic aromatic hydrocarbons (PAHs), and some pesticides. This is because the siloxane backbone of the polymer is capable of having more intermolecular forces acting on it than simple London dispersion forces, which are dominant in hydrocarbon diffusion processes in polymers like polyethylene, O’Connell says.

‘The Kickstarter campaign is one of the best ways we can generate interest in our company, mission and products at the same time as being able to evaluate the general consumer market,’ O’Connell explains. ‘We know our prices are high at the moment, and we’ll work very hard over time to make that cost barrier more accessible to a wider audience.’

Research published last year on the wristband showed that roofers who volunteered to wear the bracelets had significant exposure to PAHs, including 12 that are on the US government’s list of harmful pollutants.1 Significantly higher levels of PAHs were recorded by the wristband at a roofer training facility than on roofing worksites.

While there is agreement that MyExposome is an interesting way to bring analytical chemistry to the public, there are concerns. Questions exist about whether certain chemicals may concentrate preferentially in the wristband, whereas others may do just the opposite.

O’Connell acknowledges that this passive sampler is designed for organic chemicals only, which means metals like arsenic and mercury won’t be recorded. However, he says that once the organic compound is absorbed, it is fairly stable in the silicone, and shouldn’t interact with other compounds.

But Nick Manicke, an analytical chemist at Indiana University, US, says the biggest limitation of MyExposome is interpreting the data. ‘Will it be possible to tell the difference between a single acute high dose exposure versus chronic low dose exposure,’ he asks. ‘Probably not.’

A lot of data would therefore be needed before interesting regional trends started emerging, Manicke says. Prior to that, he suggests that it would be quite difficult to interpret the wristband data.

There is a growing interest among consumers in understanding what sort of chemicals they are exposed to on a daily basis, as the organic food movement’s popularity demonstrates. Manicke foresees a time in the not-too-distant future when typical households will be able to analyse whether there are pesticides in a piece of fruit or lead paint on a certain children’s toy.

The MyExposome bracelet is a simpler form of this idea where the consumer has the sample collection device and sends it off to the lab. However, Manicke says the drawback is that the time delay makes it difficult to know where the exposure originated.