A technique to desalinate water at low temperatures to get a clean, fresh supply

Scientists in the US have developed a membrane-free, solvent extraction method to remove salt from seawater that works at low temperatures.

Access to clean, fresh water is a necessity. Unfortunately, supply is becoming over-stretched and there is a struggle to meet demand. As a result, the development of desalination technology (the conversion of salt water to fresh water) has become increasingly important.

Current desalination techniques require large amounts of energy or membranes that need to be changed constantly as they become blocked. Although significant advances have been made in these areas, Gang Chen and colleagues from the Massachusetts Institute of Technology, Cambridge, have gone a step further and removed the need for a membrane entirely. 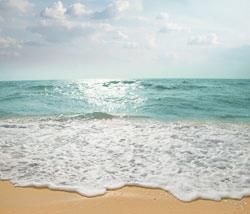 The team used decanoic acid as a solvent to mix with the water. ’Upon slight heating, our solvent dissolves the water out, leaving salts and impurities behind. Then, upon cooling, the mixture separates into two layers by gravity, releasing pure water. Unlike reverse osmosis, this method does not use expensive membranes and unlike evaporation processes, does not need heating to high temperatures,’ explains Chen. The process was shown to be effective at temperatures as low as 40 degrees Celsius and the recovered water met the salinity standards set by the World Health Organisation and the US Environmental Protection Agency.

Adel Sharif, an expert in water engineering and director of the Centre for Osmosis Research and Applications at the University of Surrey, UK, believes that further research is needed in areas such as scalability and practicality, but believes that the concept has promise. ’The proposed desalination process has the potential for low environmental impact, since it uses low grade heat, and for low capital and operating costs,’ he says.

Chen believes that the work opens up a new field of research in desalination. ’Being a simple, inexpensive process, directional solvent extraction also bears tremendous commercial potential in the desalination of seawater, clean-up of industrial waste water, treatment of water produced from oil and gas wells and other such uses,’ he concludes.