Scientists grappling to understand the effect of man-made aerosols on cloud formation have decided that particle size, rather than chemistry, is the main factor

Scientists grappling to understand the effect of man-made aerosols on cloud formation have decided that particle size, rather than chemistry, is the main factor. 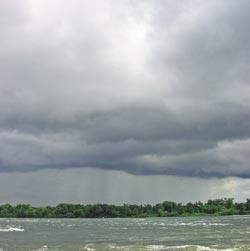 Aerosols pumped into the atmosphere can act as cloud condensation nuclei (CCN), and are an area of increasing research activity for those trying to understand climate change, said Meinrat Andreae, from the Max Planck institute for chemistry, Mainz, Germany. Andreae looked at one site in Germany to see the relationship between particle size, chemical composition and the ability of that particle to act as a CCN.

Andreae’s team found that, although chemical composition is still important for CCN, the ability of a particle to act as a CCN is influenced mainly by its size. ’In other words, if we want to know if a particle can act as CCN, we can get away with assuming a fixed composition, but we must measure its size,’ Andreae told Chemistry World.

Clouds from anthropogenic aerosols play a part in masking the effects of climate change - the clouds that form tend to have smaller droplets, are bigger, brighter and longer-lived than natural clouds, said Daniel Rosenfeld from the Hebrew University of Jerusalem, Israel. Measuring the CCN concentration by chemical means has proved difficult, so the news that size matters - and is easier to measure - ’should make it easier to quantify the effects of aerosols on clouds and hence on the climate’, said Rosenfeld.

Andreae hopes his results can be widely applied to provide an easier route to estimate CCN concentrations. To make this leap will require more sophisticated sensors, he said. Rosenfeld adds that there are weaknesses in Andreae’s methods, especially for measuring larger droplet sizes and in humid conditions - where aerosols absorb water and so expand.

’Obviously, there are still plenty of reasons to study aerosol chemistry,’ said Andreae.   The organic chemistry of aerosols is becoming more intriguing every day. But there is a bit less urgency to study it for the sake of assessing CCN ability.’