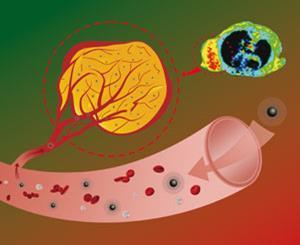 Similar imaging agents are made from clusters of nanoparticles inside micelles, but clusters are larger, limiting their use. As Shuai’s micelles encapsulate the nanoparticles individually, they are smaller and more versatile.

’Effective tumour imaging requires a tumour-specific and highly sensitive MRI contrast agent,’ explains Shaui. ’Such an MRI agent must combine high MRI sensitivity, long blood circulation and tumour specificity. We believe that these features are equally important and should be combined into one system.’

’Compared with other systems, this system is useful for imaging non-liver tumors,’ says Youqing Shen, an expert in biomaterials from Zejiang University, China. ’Currently there are no such highly sensitive MRI contrast agents for non-liver tumour detection.’

Shuai says the next step for these encapsulated nanoparticles is to achieve an even higher sensitivity and to carry out preclinical studies, including studies on the pharmokinetics and long term in vivo toxicity. One future challenge will be to extend this strategy to the detection of other tumours with different biomarkers, he adds.