The world’s smallest pipette has been developed by US scientists. It is capable of dispensing drops of a molten gold-germanium alloy with a volume of a few zeptolitres, that is, a billionth of a trillionth of a litre. Watching these tiny drops led Eli and Peter Sutter of the Brookhaven National Laboratory, New York to make observations that challenge the classical theory of crystallisation. Their findings are published in the journal Nature Materials this week.1 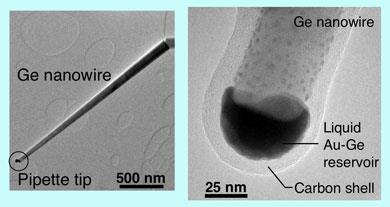 Close up on world’s smallest pipette

To create the nanopipette the authors used a gold catalyst to grow a germanium nanotube with a tip containing a reservoir of molten Au-Ge alloy. The whole thing was encapsulated within sheets of graphene which was pierced at the tip with an electron beam allowing the melt to flow out.

When Eli Sutter explains that these drops are ’quite small’, it’s something of an understatement. The previous record was an attolitre pipette, producing volumes around 100 times larger.2 Now, drops containing only a few thousand atoms have been dispensed, and their size means they behave differently to bulk liquids when cooled to just above their melting point. They are too large, however for computer simulation which becomes too complicated above a few hundred atoms.

Conventional crystallisation theory states that crystals nucleate around an impurity somewhere in the bulk and grow outward from that point. But the pipette produces droplets so pure that this could be ruled out, meaning Sutter didn’t know what to expect watching the drops cool with a transmission electron microscope. 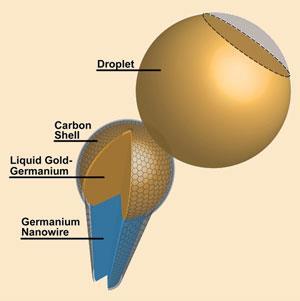 In fact, just above the melting point she saw the drop start to develop thin solid-like flat facets at the surface. These facets would disappear and re-appear elsewhere on the surface ’a little bit like a dance’, said Sutter. A couple more degrees cooler and the facets became frozen in as the drop solidified from the outside in.

The drops were studied while suspended from the pipette tip by a 10 ? thread of alloy. This removes any interactions between a container and the drop surface that could hide such subtle effects. The drop is ’practically levitating’ said Sutter, who also hinted that ’quasi-free’ drops like these might shed light on how atmospheric droplets behave, with implications for modelling climate behaviour. Sutter cautions that the conditions in these experiments would be make it impossible to repeat them with water, however.

Andreas Bruckbauer of the Department of Chemistry, University of Cambridge said this was ’a  truly amazing method’ of dispensing liquids, for a specialized but ’very interesting and very important’ purpose.

Harry Heinzelmann of the Centre Suisse d’Electronique et de Microtechnique in Switzerland developed the previous smallest pipette, and is similarly impressed. The new method is limited by the material being dispensed, but ’allows scientific work that was not possible before’ and complements existing techniques, he said.  Sutter now plans to repeat the experiments using alloys with different surface energies, and hopes this could lead to improved control of drop growth to atomic resolution.