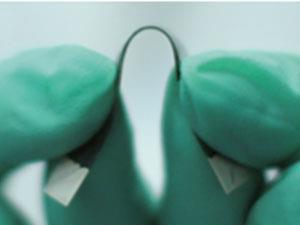 Scientists in China have developed a smart window that not only heats and cools a building, but can also act as an energy storage device to power electrical equipment within the building.

Smart windows are already in use in some buildings; they are used to reduce energy consumption by keeping the interiors cool and controlling the light levels within. An example of this is in museums, where artifacts could be damaged by too much sunlight.

Now, Zhixiang Wei from the National Center for Nanoscience and Technology and colleagues have made a window that combines a supercapacitor with an electrochromic window pane that changes colour. In bright sunlight, it absorbs and stores energy, but when it is full to capacity, the window darkens to limit the amount of light that enters. This controls the temperature and brightness of the room and the captured energy can be used to power equipment, such as television screens. As the electricity gets used up, the energy storage smart window (ESS window) will lighten and begin to absorb more sunlight to recharge itself.

The ESS window is made of polyaniline nanowire arrays, which are deposited onto a transparent film that has been coated with a conductive layer. The nanowires are then covered with a gel electrolyte layer to form an electrode, and two electrodes are sandwiched together to make a working device.

Polyaniline has a high capacity and doesn’t cost much to make, plus it has the added advantages of being transparent and flexible. ‘Flexible devices are attracting more and more attention because they are lightweight, easy to roll up, and can be designed in a more fashionable way. It is no doubt that a flexible smart window like ours possesses these properties. For instance, the ESS window can be rolled up like a curtain if it is not being used,’ says Wei.

John Rogers, an expert in photonic devices from the University of Illinois at Urbana-Champaign, US, was cautiously optimistic about the work. ‘Such technologies, if they can be made cheaply and in forms that offer long-lived operation, could be valuable in contexts ranging from automotives to homes,’ he says.

Wei’s team is working on optimising their device by trying different electrode materials and improving the window’s electrochromic properties. They are also looking at integrating a solar cell into the device to store even more energy.