The innocuous bar of soap is the latest product to be at the centre of a chemical controversy, in the wake of a study by researchers at the Center for Health and the Environment, University of California Davis, US. Bill Lasley and his colleagues discovered that triclocarban (TCC) - an antibacterial agent commonly included in soaps and other cleaning products - can disrupt the activity of natural hormones.

In tests on cultured human cells and in vivo studies in rats, Lasley’s group showed that the chemical amplified the effects of the androgen testosterone and enlarged the sexual organs of rats - including their prostate gland[1]. The team fed the chemical to the rats, mixing doses of 3 micrograms per litre into their food - around three times the amount estimated to be absorbed through the skin during a shower.

’The incidence of enlarged prostate (or benign prostatic hyperplasia) is increasingly common in the US - what we need to ask is could it be exposure to this chemical that is inducing it?’ said Lasley.

"The incidence of enlarged prostate is increasingly common in the US - what we need to ask is could it be exposure to this chemical that is inducing it?" - Bill Lasley

TCC has been in use for around 45 years and has raised concern in the past when it was found to persist in effluent from sewage treatment plants[2]. But Lasley’s study is the first to identify a mechanism for its effects and bestow it with the infamous title of ’endocrine disrupter’.

’This is a new type of endocrine disrupter - we see a mechanism we didn’t recognise before,’ Lasley told Chemistry World. ’It’s fair to suggest that the chemical may have much more power in a rat than in a human, since the TCC was in their food, whereas humans are exposed to it through their skin. But since we’ve seen this new mechanism, we need to look at population-based studies and find out how much TCC is in people.’

But Lanxess, a German chemical company that manufactures TCC, disputes the value of the study. The company referred to a 2005 evaluation by the European Scientific Committee on Consumer Products (SCCP), which reviewed toxicological data on the chemical. ’TCC did not cause carcinogenic or reproductive or developmental effects in in vivo animal studies,’ the company said in a statement, adding that according to the evaluated data, the chemical could not be classified as an endocrine disrupter. 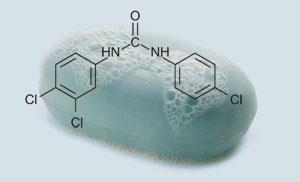 Triclocarban, an antibacterial agent used in soap, amplifies the effects of testosterone, researchers have found

Rolf Halden from Arizona State University’s Biodesign Institute, US has studied the environmental persistence of TCC. In a study yet to be published, Halden examined samples from water courses throughout the US, and found traces of chemical in sediment in more than half of them. ’We found contaminated samples at a much higher rate than we expected,’ he said. ’We’re finding it in parts per million-scale concentrations in the sediment and much higher concentrations in solid waste.’

Halden raised concern about secondary exposure to TCC through the recycling of municipal sludge - the solid waste extracted from treated water - which is returned to the environment as agricultural fertiliser. ’Because so much by weight of soap is TCC and it’s so persistent, 50-75 per cent of it ends up in agricultural soils,’ he told Chemistry World. ’Since this doesn’t go away, we must consider if [it] causes harm, not just to us, but to other organisms in the food chain and environment.’

The Soap and Detergent Association (SDA), the body representing manufacturers, stressed that it welcomed more research, but called Halden’s conclusions ’misleading’. ’Many chemicals used to make everyday products, including those used in laboratory research labs, can be found in the environment in trace amounts. But the mere presence of a chemical does not signify a health risk,’ it said in a statement. ’And we have seen no reliable data suggesting TCC poses a health risk.’

But Halden is convinced that there is sufficient evidence to warrant the elimination of TCC from personal care products. ’With knowledge of this environmental persistence and the animal study evidence, these chemicals would not be licensed for use today,’ he said. ’This chemical doesn’t serve any purpose and it’s disappointing that regulatory steps have not been taken to remove it from circulation.’

Lasley pointed out that public concern could be sufficient to persuade manufacturers to reduce their use of TCC. But the SDA insisted that the evidence was simply insufficient, saying that ’facts, not fear, should drive public discussion of scientific research’.