So-called ’cryptic’ bacterial genes that preside over the production of medically important compounds can be switched on using environmental triggers, German scientists have shown. The researchers used soil extracts to persuade a Clostridium  species to produce a hitherto unknown antibiotic that is active against methicillin-resistant Staphylococcus aureus  (MRSA). 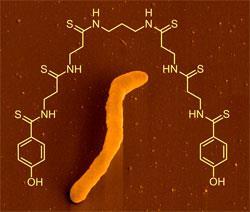 The antibiotic closthioamide has been made by the bacteria C. cellulolyticum

Many antibiotics made by bacteria are produced through non-essential biosynthetic pathways - they are secondary metabolites. But getting anaerobic bacteria, like those from the Clostridium genus,  to produce these compounds has, until now, proved difficult. Having delved into the recently published genome of C. cellulolyticum, however, Christian Hertweck at the Hans Kn?ll Institute in Jena was convinced it would be worth the trouble.

’We saw some typical genes that code for biosynthetic machineries such as those in antibiotic producers,’ says Hertweck. ’We call these cryptic gene clusters, because it’s absolutely not clear what they’re good for.’ Their plan was to wake up these sleeping genes by exposing the bacteria to different environmental conditions.

Hertweck and his team tried a number of tactics, including various chemicals and different ways of stressing the bacteria, before they hit the mark with a simple soil extract. Adding soil produced a new peak in the high performance liquid chromatography (HPLC) profile of the bacterial culture. The peak turned out to correspond to a unique thioamide - with six thioamide groups - that the team named closthioamide. They found that this new antibiotic can inhibit the growth of important pathogens including MRSA.

Klaus Winzer, who works with a Clostridia research group at the University of Nottingham, says the research is potentially very interesting, but is surprised by the focus on this particular bacterium. ’If someone had asked us to do similar work in this class of bacteria, C. cellulolyticum would certainly not have been our first choice,’ he says. ’Although the organism has industrial potential in terms of biofuel production, it grows much too slowly.’ He adds that it will be interesting to see which soil factors are triggering antibiotic production.

Hertweck agrees - so far, the team have little idea what the mystery compound is. ’What is causing it, we don’t know, because it’s extremely difficult to fractionate soil,’ he says. ’But we have at least the indication that it’s water soluble. And we also have direct evidence, although it’s not published yet, that the antibiotic is not derived from soil but produced by the Clostridium  itself.’

He says the research provides hope that other anaerobic bacteria also produce secondary metabolites. As well as developing synthetic strategies to make closthioamide, his team are screening various anaerobes to see what else they can dig up.