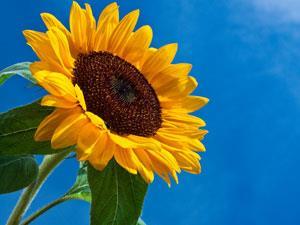 What do you do when solar panels are static but the sun isn’t? Why not take inspiration from the fields of sunflowers that track the sun during the day, say US researchers.

The angle between the sun’s light and photovoltaic panels is important for absorbing energy and various ‘solar tracker’ systems, using complicated gears and motors, have been developed. However, there’s an obvious advantage in creating systems that can achieve this without complication. Inspired by nature, Hongrui Jiang’s group at the University of Wisconsin-Madison, have developed a nanocomposite that twists and moves in direct response to the sun’s light and warmth and used that to make a device that significantly increases the output of solar cells.

‘I think light driven actuators are fascinating and could open windows to new applications,’ says Jiang, explaining why he decided to develop ‘artificial heliotropism’. So first Jiang had to develop a material to respond to natural sunlight and then use it to make a workable technology.

‘Natural sunlight is white light, but many current LCEs are responsive only to specific wavelengths,’ Jiang explains. ‘The LCE we developed can respond to white light, because of the CNTs absorbing a wide range of light and generating heat for the phase transition of the LCE matrix.’ This makes Jiang’s material able to respond to sunlight using only a concave mirror behind to concentrate the light. 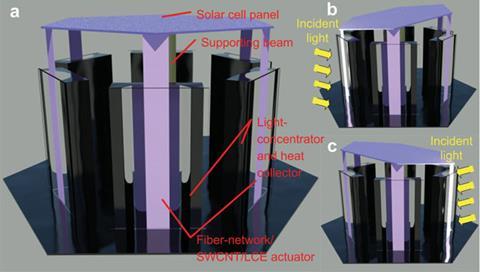 Jiang’s group then developed a device with columns of the LCE composite supporting a solar cell, a design that he says is also taken from nature: ‘The multiple-strip design of the actuators was inspired by heliotropic plants. We divided the actuators into multiple units, each covering a certain range. As the sun moves during the day, the one or two actuators that are facing the sun will respond and pull the solar cells to angle towards the light (video here).’ In both field and laboratory tests, the device significantly increased the photocurrent from the heliotrope panel versus a control.

‘The important aspect of this work is to make the device cheaper and more practical,’ says Eugene Terentjev of the University of Cambridge, UK, who was one of the first to describe light induced mechanical changes in liquid crystal elastomers. ‘It remains to be seen whether the technology will pick up and use this particular design: much depends on the cost of materials (which are complex: a price one pays for having a smart response) and robustness of the construction,’ he adds.

‘I think mass production is the key to reduce the cost,’ says Hongrui, who is interested in finding industrial partners to help commercialise the technology.

Terentjev, for one, says he hopes Hongrui does. ‘The field of liquid crystalline elastomer actuators has been waiting for such an application for a long time. One hopes this solar tracker is, at last, the application that would practically benefit both the solar energy technology,’ he concludes. ‘If it works, then the cost of the materials will drop down and many other applications would become feasible.’