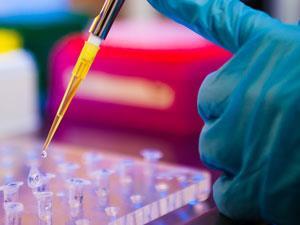 The study compared two methods of preparing drug solutions for assays: the standard pipette method and acoustic dispensing. The latter uses high intensity sound waves to eject droplets of solution upwards into an inverted multi-well plate (see video). The surface tension of the droplet then holds it in place until it is diluted.

‘You can imagine a cup of coffee on a loudspeaker,’ explains study author Sean Ekins, an independent consultant based in North Carolina, US. ‘It’s a completely contactless process. The sound is just popping the liquid up out of the container.’

The team, some of whom worked for Labcyte, which develops acoustic dispensing technology, used data from patents published by pharmaceutical firm AstraZeneca, which recorded how effective 14 drug candidate molecules were at inhibiting a receptor protein called EphB4. Each compound’s potency was measured after pipette-based and acoustic dilutions. The results from the two screenings were sometimes very different.2,3 ‘It blew me away when I first saw these numbers,’ says Ekins. ‘It’s not like there’s just one example. Several of the compounds have values that are 250- or 270-fold different, depending on the dilution method.’ 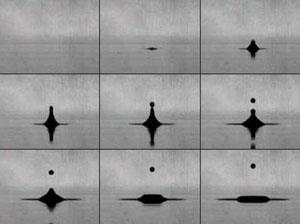 Ekins then used software to calculate 10 descriptors for each drug candidate; factors such as lipophilicity, molecular weight and polar surface area. He compared these with the molecules’ potencies as measured by acoustic and pipette-mediated dilutions and produced a pharmacophore – a model of how biological structures like proteins interact with small molecules – from each data set. The pharmacophores predict the ideal molecular shape and properties required for effective inhibition of the target receptor.

‘The pharmacophores make strikingly different predictions about what will be a good drug for this target,’ says Ekins. For example, the acoustic model predicted the perfect drug would have two hydrophobic features, whereas the pipette model didn’t forecast any. When Ekins looked at the best inhibitors for EphB4 he found their structures were a good match for he acoustically derived pharmacophore.

Based on these results Ekins says he is concerned that parts of the pharmaceutical industry’s biophysical database could be ‘misleading’ drug developers. ‘I mean, if you got these two sets of predictions you’d go off in totally different directions,’ he said.

According to Darren Cawkill, an associate research fellow at Pfizer, UK, most pharmaceutical companies already use acoustic dispensing as their ‘mainstream method for preparing compounds for high-through put screening’. Compound carryover is a ‘significant problem’ for pipettes, he says. So too are blockages and the environmental impact of waste tips.

‘This study is certainly a new angle on the problems with pipettes,’ says William Janzen, director of assay development and product profiling at the Center for Integrative Chemical Biology and Drug Discovery, University of North Carolina, US. He says that the research needs to be followed up, but adds that it is ‘not completely clear’ that acoustic transfer is responsible for the differences in measured potencies. ‘A robot that was out of the quality control range could potentially have caused the same thing,’ he says.

The study did not provide any firm evidence as to why the two dilution methods produced such different results. Ekins says he wants to raise awareness of the problems pipettes can cause. He thinks smaller-scale screening facilities might not be aware of the scale of the errors pipettes can introduce.

Janzen agrees. ‘For me, this study highlights the importance of conversations between biologists and chemists. As long as those happen, this sort of problem can be identified and managed.’