Starfish glue secrets under the microscope 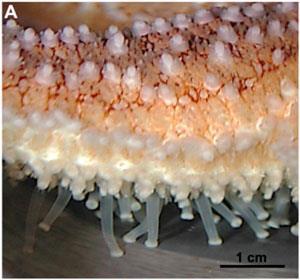 An international team of scientists has isolated the protein that starfish secrete from their feet to glue themselves to the sea bed. It is hoped that this discovery could lead to the production of synthetic analogues of the protein, which could find use as adhesives for surgery, tissue engineering scaffolds and mucoadhesive hydrogels for drug delivery.

‘It is the first time that a protein from a temporary adhesive has been characterised,’ says Elise Hennebert from the team at the University of Mons, Belgium. Proteins in permanent marine adhesives, such as those that allow barnacles and mussels to cling to rocks, have been studied extensively and have led to products such as antifouling coatings for boats. Temporary adhesives, such as the one that allows starfish to stick to a surface yet still move around to feed and find a mate, have not been studied nearly as intensively.

Hennebert’s team began by extracting the glue’s proteins using denaturing and reducing agents. They then picked out one of the most abundant proteins in the glue, which they dubbed Sfp1, and set about sequencing and modelling it. The team think that it is this protein secreted by the starfish’s tube feet is what lets it stick to surfaces. ‘The footprints are made up of a primary film covering the surface, which is mainly responsible for adhesion to the surface, and a meshwork deposited on this film for cohesion,’ explains Hennebert. Sfp1 is located in the meshwork and it possesses different functional domains that the team believes links the cuticle covering the part of the tube foot furthest from the body with the proteins in the primary film. 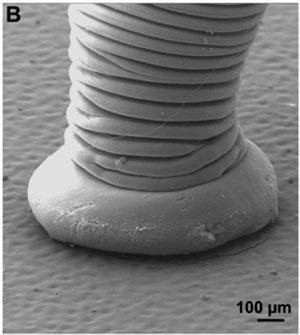 The Sfp1 protein ‘has some interesting differences from the sequence of proteins in permanent glues’, says Andrew Smith, an expert on animal physiology and biomechanics from Ithaca College, US, who wasn’t involved in the research. Hennebert explains that Sfp1 is larger than the proteins found in glues produced by mussels and other marine organisms and doesn’t contain the amino acid 3,4-dihydroxyphenylalanine or DOPA. The creation of a cheap, synthetic alternative to DOPA has been a major stumbling block for recreating the proteins in permanent marine adhesives.

‘We have wondered how [starfish] accomplish this feat of material design,’ says Jonathan Wilker, an expert in marine adhesives at Purdue University, US. ‘And now there are detailed insights to describe a primary component of the process.’ ‘Overall, this work provides a lot of interesting ideas to follow up on, and could ultimately lead to substantial practical applications in the development of novel adhesives,’ Smith concludes.