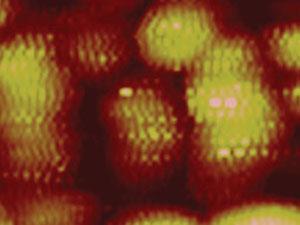 Some scientists question the existence of self-assembling stripes on nanoparticles

A prickly controversy has erupted in the rarefied world of nanoscience revolving around the strength of the evidence that molecules can assemble themselves into discrete stripes around gold nanoparticles. The issue highlights the difficulty of interpreting images of nanoscale objects.

For many years researchers have been decorating gold nanoparticles with thiolated ligands to imbue the nanoparticles with a range of properties. In 2004, a group led by Francesco Stellacci, then at the Massachusetts Institute of Technology in the US, published a paper in Nature Materials demonstrating that if two different thiolated ligands are presented to a gold nanoparticle, the ligands spontaneously assemble into discrete, evenly spaced stripes around the particle.1 Subsequent work showed that the stripes could be manipulated and that their presence was responsible for a variety of properties of the coated nanoparticles. But the principal strand of evidence for the existence of the stripes in the 2004 paper were images obtained from a scanning tunnelling microscope (STM).

Align in the sand

At the University of Liverpool in the UK, Raphaël Lévy, whose research makes extensive use of gold nanoparticles, was not convinced by the images. ‘In these images all the stripes were facing the same direction, aligned perpendicular to the scanning direction – why would they align themselves this way?’ says Lévy. ‘This was highly surprising.’

The second problem, Lévy says, is that the stripes in the images were spaced evenly. If the stripes were evenly spaced on the three-dimensional particle, they would not be so on the STM’s two-dimensional ‘bird’s eye view’ of the structure. Both of these factors strongly suggest that the stripes are in fact an artefact of the imaging process, Lévy contends in a paper published in the nanoscience journal Small.2

Not so, says Stellacci, whose response to Levy appears in an accompanying paper in Small.3 Stellacci’s biggest gripe with Lévy’s attack is that Lévy has focused on a small number of images and failed to take into account the subsequent eight years of data published in multiple peer-reviewed papers that corroborate the original stripy hypothesis. ‘This debate has been driven by looking at a single image out of eight years of scientific production, which go well beyond that single image and well beyond the STM technique,’ Stellacci tells Chemistry World. ‘People have come up with theories to explain our observations and simulations have been carried out by three separate groups that correctly predict the behaviour and morphology of the particles.’ A variety of experimental data from NMR, transmission electron microscopy, atomic force microscopy and x-ray diffraction all support the hypothesis, says Stellacci, who is now based at École Polytechnique Fédérale de Lausanne in Switzerland.

Stellacci accepts that the original images could be open to a variety of interpretations, but says that there are reasons why the particles may have aligned themselves in one direction, or been selectively picked out by the STM imaging procedure due to their higher contrast. In any event, says Stellacci, images published subsequently did indeed show varying alignment of particles. As for the equal spacing between the stripes, STM imaging of curved surfaces is not fully understood. In addition, the relationship between the surface, the STM tip and the tunnelling current, and the way that the data is processed by the imaging software, makes it entirely possible for equally spaced stripes to appear on the image. 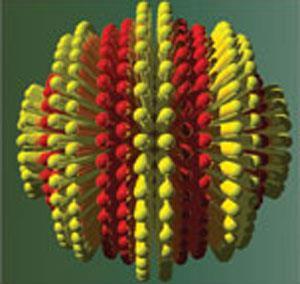 Computer graphic of predicted alignment of thiolated ligands on gold nanoparticles - do they even exist?

Both sides in the argument have powerful allies. Sharon Glotzer, who heads the laboratory for computational nanoscience and soft matter simulation at the University of Michigan in the US, takes Stellacci’s side. Her group has carried out extensive simulations of the particles, originally independently of Stellacci and now in collaboration with him. ‘Both have confirmed his findings as well as predicted new phenomena that he later looked for and confirmed,’ Glotzer says. ‘At least half a dozen PhD students and postdocs in my group, using three or four different simulation methods, theoretical treatments and using multiple, independently written codes, have simulated these particles as well as phenomena that result from their novel structure. Without exception, all find that binary mixtures of ligands assemble into stripes on spherical particles under the circumstances in which Stellacci also finds stripes.’

But Philip Moriarty, an authority on STM at the University of Nottingham in the UK, has reservations about the interpretation of Stellacci’s images – beyond those presented in the 2004 paper – and does not believe that all the sources of potential artefacts have been accounted for. ‘This is not at all convincing,’ says Moriarty. ‘Moreover, the stripe patterns they observe span little more than a few pixels and could easily arise from random noise, particularly given the way they do software zooms of their images, rather than reduce the scan area while imaging.’ While Moriarty accepts that stripes could indeed be present on the nanoparticles, the evidence from the STM images ‘is far from compelling’.

Stellacci however remains confident in his findings. ‘To have my data reviewed so thoroughly in this way is not the most pleasant thing to happen, but I accept that it is part of the scientific process and can only help to make the work more solid.’

Lévy, who has blogged on the issue, is happy that his concerns have received an airing, although it has taken more than three years. ‘I am not saying that there cannot be self-organisation of molecules on surfaces and I am not saying that self-organisation does not have an impact on properties,’ he says. ‘But the evidence for stripiness here is based on an artefact.’

It would seem that, like parallel stripes, there is unlikely to be a meeting of the ways any time soon.