Stripping down the carbon storage problem

Chemists looking at materials to capture carbon dioxide need to pay attention to practically regenerating them once full. Could steam be the answer?

Chemists looking at solid amine materials to capture carbon dioxide from industrial flue gases need to pay more attention to how they will be regenerated in a practical setting, say US researchers. Using steam to strip out absorbed CO2 would be much more practical than flushing with inert gases like nitrogen.

Carbon capture and storage (CCS) is one part of a general strategy for reducing CO2 emissions to combat climate change. Pilot-scale projects to scrub CO2 out of the flue gases from coal-fired power stations are already in progress using aqueous amine solutions, but many researchers believe solid adsorbent materials could provide cheaper, more efficient systems.

Chris Jones from the Georgia Institute of Technology in Atlanta, points out that most academic research on solid supported amines has focused on increasing their capacity to absorb CO2, rather than practical ways to get the gas back out. ’Typically, the way people regenerate these materials in the lab is to heat them in an inert gas flow like nitrogen or helium,’ says Jones. He adds that while this may be easy and convenient in a research lab, it’s completely impractical for commercial applications. 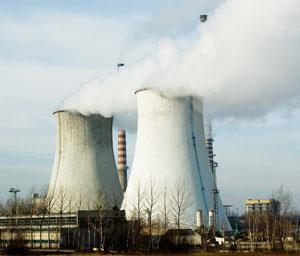 Could steam from power stations be harnessed for carbon capture and storage?

Part of the reason for this impracticality is that the released CO2 ends up back in a gas mixture. If the end goal is to store the CO2 underground, then it is obviously desirable to have it in a pure form as no energy or space is wasted transporting or storing the mixed gases.

Jones suggests three possible processes that could be used to release adsorbed CO2. Firstly, heating the solid in a vacuum, ’but on a commercial scale, using vacuum can be expensive,’ says Jones. The second idea is heating in a stream of CO2, but the lack of concentration gradient makes it harder to get the adsorbed gas off the amine. The third option is using steam - this provides the necessary heat and the CO2 can be relatively easily separated from the water afterwards.

Jones’s team took representative materials from the three common classes of solid-supported amines, and showed that they could stand up to three cycles of absorption and steam-stripping treatment. ’All three showed promise for being regenerated with steam without drastic degradation,’ says Jones. However, he acknowledges that three cycles is not really enough to prove the materials’ viability - it is simply a promising preliminary result.

Gary Rochelle from the University of Texas in Austin, US, thinks that this is a step in the right direction for solid adsorbents, by addressing the problem of how a viable industrial process might be set up. However, he remains unconvinced that such a process would offer significant advantages over current aqueous amine technology.

One of the often-quoted disadvantages of aqueous amine systems is the need to heat the solution to release the CO2. Since the majority of the liquid is water, with its high heat capacity, constantly heating and cooling takes a lot of energy. But Rochelle explains that from a process point of view this is less of a problem, as heat-exchangers can recycle the majority of that energy. ’But with a solid adsorbent you have to heat and cool the solid, and solid-solid heat exchange is not easy,’ he says.

Another issue is the source of the steam. Jones believes that relatively cool, low pressure ’low grade’ steam that is of little use in plants could be diverted to regenerate the adsorbent. However, Rochelle explains that the current aqueous amine systems already use this type of steam. ’In a power plant that low pressure steam still has a lot of value for making electricity,’ he says, ’there’s no such thing as free steam.’

However, both researchers agree that it is important to examine things from a complete process point of view rather than looking at   individual elements to get an idea of how practical the technology could be.