Cell adhesive made by inverting phosphatidyl choline into choline phosphate 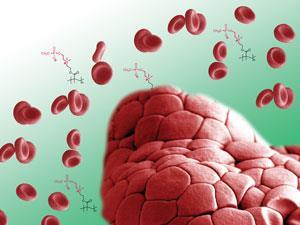 Scientists in Canada have made a super-strong cell membrane adhesive and used it to stick red blood cells together. The polymer, based on the phospholipid head group phosphatidyl choline, could be used to secure cells in particular positions for tissue engineering and wound closure.

Don Brooks, from the Centre for Blood Research at the University of British Columbia, who led the study, says inspiration for the work came after trying to understand the chemistry of cell membranes. ‘Phosphatidyl choline [PC] is found in every cell membrane, except for some primitive bacteria, so we wondered what would happen if we were to turn the molecule around to choline phosphate [CP]? Would you get an adhesive effect because the positive and negative charges are now inverted?’ This proved to be the case, and the team demonstrated that branched polyglycerols containing CP bound to a variety of cell membranes.

To enhance this adhesive effect, the team searched for a new monomer based on CP. 2-(Methacryloyloxy)ethyl choline phosphate (MCP) appeared to be the perfect choice, and was easily polymerised using radical polymerisation.

Synthetic route to MCP and polyMCP

The team tested the adhesive capabilities of their new polymer on red blood cells. ‘Red blood cells have a well-defined structural membrane. Our adhesive sticks the cells together and changes their shape, letting us learn a lot about what the polymer does,’ explains Brooks. The team found that although the cells aggregated together very strongly, there was no damage to the cell membranes, suggesting that the polymer could be used as a tissue sealant.

Costas Patrickios, an expert in polymer synthesis at the University of Cyprus, thinks that the preference of polyMCP to bind to its inverse sequence in membrane lipids, rather than binding to itself, is remarkable. He suggests that polyMCP should also bind to its inverted version, polyMPC. ‘Addition of the inverted polymer could reverse the polyMCP–cell interaction by competitively binding with polyMCP and displacing it from the cell membrane. The ability for complete reversal of the interaction would pave the way for several biomedical applications, including blood cell storage and reuse by condensation from the plasma using polyMCP and subsequent redispersion using polyMPC.’ However, Brooks says that this would be very difficult to achieve because the high number of electrostatic interactions for each polymer results in very strong cell binding, and inhibitors such as polyMPC tend to be unsuccessful because they have limited access to binding sites.

The team are now working hard to develop their polymer into a tissue sealant.