Nanoplasters get cells into sticky situation 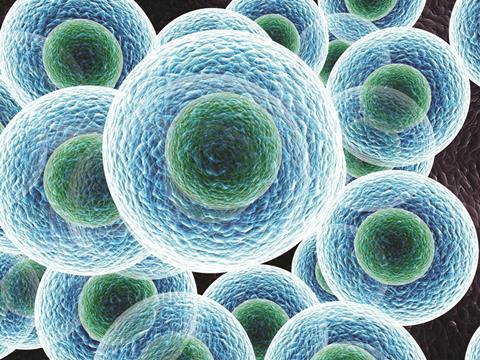 An international team of researchers has found that sticky nanoparticles can aggregate cells lacking the naturally occurring proteins that normally hold them together. These polystyrene nanostickers could help wound healing or stop tumour cells from spreading through the body.

The ability of cells to stick together is vital in human tissues, and when normal cell adhesion goes wrong disease can occur. Artificially preventing cells from drifting apart could open up opportunities in areas including tissue engineering.

Françoise Winnik from the University of Montreal, Canada, Françoise Brochard-Wyart from the Institut Curie in France and colleagues monitored the aggregation level of cells with reduced cadherin, one of the proteins responsible for cell–cell adhesion. Adherent cells in a suspension aggregate over time as they come into contact with each other, while non-adherent cells remain as single cells despite being in close proximity to others. The team added various polystyrene and silica nanoparticles into the cell suspension to determine their effect on the cells’ ability to stick to each other.

Using their results, the team developed a mathematical model of the dynamics that determine the sticking efficiency of different nanoparticles. ‘This model is a key point to understand the adhesive effect of nanoparticles located on the surface of cells, but could also be interesting in research focused on nanoparticles having an effect inside cells,’ says Winnik. Their findings showed that smaller polystyrene nanoparticles promoted stronger adhesion than larger particles, and that the charge of the nanoparticle had no effect on its ability to bind cells.

However, as Josep Samitier Martí, a nanobioengineer from the Institute for Bioengineering of Catalonia in Spain comments: ‘An open question not explained in the paper is the mechanism involved in the nanoparticle–cell adhesion process, [for example] electrostatic forces, protein adsorption processes or interaction with other cell receptors.’ This point may need to be addressed as the work moves towards clinical applications, where the nanoparticles’ behaviour in complex physiological environments will need to be studied in great detail.

Simply trying to stick tumour cells together ultimately may prove to be an over-simplistic approach to prevent complicated metastasis pathways, according to Samitier Martí, but other opportunities may exist in areas such as 3D bioprinting and Winnik is excited about the directions that this work might take: ‘I would like to see the adhesive effect of the nanoparticles we tested on wound healing, and I also hope other nanoparticles can be tested with our method and models.’