Super-sized molecular sponges that trap and store carbon dioxide have been unveiled by chemists in the US. The zeolites are heat resistant, easy to make and can filter CO2  from a complex mixture of gases [1].

Developed by Omar Yaghi and colleagues at the University of California at Los Angeles (UCLA), the new compounds are made from zeolitic imidazolate frameworks (ZIFs) - porous crystalline materials with a cage-like structure that resembles natural aluminosilicate zeolites. Earlier this year, Yaghi’s team announced the development of a new method to make complex ZIFs, some of which could also mop up CO2 [2]. But the new ZIFs are better - they stay intact at temperatures of up to 500?C and work well at room temperature 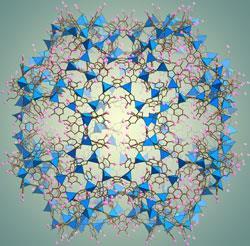 Named ZIF-95 and ZIF-100, these molecular cages are the largest ever made - comprising more than 7500 atoms and boasting diameters of up to 7nm. As a result, a single litre of ZIF-100 can trap and store around 30 litres of CO2  at ambient pressure.

’The key to generating such large cages is an organic linker that determines how the cage structure builds itself,’ says Bo Wang of the UCLA team. By adding a chlorine atom at a key point in the imidazolate linker, the team were able to force the cages to grow into bigger shapes.

The ZIFs have excellent selectivity thanks to functional groups on the organic linker which act like ’revolving doors’ - allowing CO2 molecules to enter but keeping out other gases such as nitrogen, methane and carbon monoxide.

To recycle the ZIF crystals, they are exposed to low pressures that suck carbon dioxide out of the lattice. The ZIFs are relatively easy to make from cheap starting materials so they should not be too expensive to use for industrial carbon capture. They could also be used to purify gases, Wang says.

’The unprecedented and very large cage structure types reported here are truly exquisite,’ says Paul Wright, an expert in zeolite chemistry at the University of St Andrews, UK. ’There is a drive to prepare selective carbon dioxide sorbents to remove carbon dioxide from gas streams [and so] these novel materials are certainly of interest.’