Super-thin nanowires made inside nanotubes

Japanese researchers have made ultra-thin metal wires by growing them inside carbon nanotubes. It is hoped that the research - which can make wires only a single atom in diameter - could provide interesting clues to the best components for future nanoelectronic devices.

Atom-thin metal wires show many novel electronic properties - but the wires are so fragile and prone to oxidation that they have been difficult to study. Ryo Kitaura and colleagues at Nagoya University solved this problem by growing the wires encased within protective nanotubes. This means that their properties can be measured and mapped.

’The process [of growing the tubes] is very simple,’ says Kitaura. ’We put carbon nanotubes and metal powder (usually of a metal that sublimes at a relatively low heat) into a glass tube and heat it to around 500-600?C’.

The vaporised metal atoms fill up the hollow centres of the nanotubes and solidify into wires. By varying the width of the nanotube, Kitaura’s team were able to control the thickness of the wires - varying them from a few atoms in diameter down to a chain of single atoms. 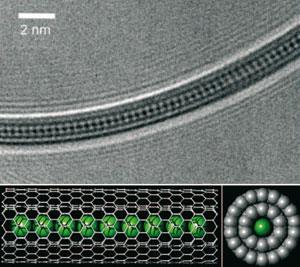 A TEM image of a single atom Eu wire inside a double-wall carbon nanotube (top), and models of the encapsulated wire

A crucial aspect of the work, Kitaura notes, is making high quality nanotubes for the starting material, so that the metal vapour can flow in smoothly and regularly. This allows the process to reliably fill a high proportion (up to 90 per cent) of the nanotubes with metal.

Importantly, although the team have only demonstrated the technique using europium and ytterbium metal, they are confident that other metals with low sublimation temperatures can also be used. This opens up a great deal of scope for researching other metal wires, such as samarium, potassium, rubidium, calcium and strontium.

A possible advantage of the process is that the filled nanotubes may have enhanced properties - such as the metal centre changing their conductivity. ’There is potential for charge transfer between the nanotube and ensapsulated metal, so it may improve the semi-conducting properties of the tubes,’ says David Carey, a nanotube expert at the University of Surrey, UK.

One question that remains is whether the wires would be stable if the nanotubes were dissolved away. ’This process is rather like putting billiard balls into pipes of different width, so they have different packing orientations than you would usually find,’ Carey says. ’But this does not necessarily mean that these structures won’t be stable outside the nanotubes.’