Micrometre-scale dispersions could be used in foams, ice cream, paints and contrast agents

Tiny bubbles of air can last for over a year if they are covered in elastic shields of surfactant, US scientists have found. A long-lasting dispersion of bubbles this small, they suggest, might improve the properties of foams, paints, contrast agents for ultrasound imaging, and aerated foods such as ice cream.

Scientists at Unilever observed in the 1990s that they could whip up stable micrometre-sized bubbles of air whose surfaces had nanoscale facets - looking like a golf ball with convex dimples. ’We could make the bubbles incredibly small and much more stable than they’d ever been, but we didn’t understand why it worked,’ says retired Unilever physical chemist Rodney Bee.

Now Bee and other Unilever researchers have collaborated with Howard Stone and colleagues from Harvard University, Massachusetts, to show how some surfactants can form nanoscale features on a bubble’s surface, and keep it intact for over a year. 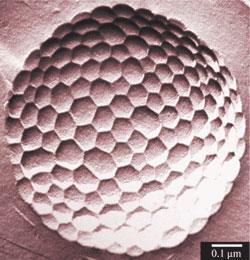 Surfactants - used in detergent to keep particles of oil and grease from clumping together - have often been used to stabilise gas bubbles. They line up at a bubble’s surface, relieving the surface tension that would otherwise cause it to shrink and dissolve. Keeping bubbles less than a micrometre across intact for a long time is more difficult, although researchers have stabilised microbubbles for a few months by filling them with poorly soluble gases such as nitrogen or perfluorocarbons, and by surrounding them with lipid structures or nanoparticles.

Emilie Dressaire, part of the Harvard team and lead author of the study, played with a few surfactants and solutions before hitting on a mixture of mono- and diesters of sucrose stearate in glucose and water. The ingredients are mixed at 70?C, and a kitchen mixer whips in air to create a foam as the mixture cools to room temperature.

As surfactants crystallise out of the viscous syrup, they latch onto the small bubbles as they are forming. The bubbles inevitably start to shrink, but their shells are elastic: the tails of the attached surfactant molecules bend and their heads clash together, building up stress that counteracts the shrinking. Stone’s team showed they could tune the sizes of the nanoscale interfaces that form by changing the chemical nature of the surfactants.

Stone says that now the principles are understood, the team are looking at possible applications. He suggests that tiny bubbles might improve adhesives or change the light-scattering properties of paints. Bee says microbubbles can change the fracture properties of foamed construction materials, and are also used as contrast agents to improve ultrasound images. ’The current system might work for changing the taste or appearance of ice cream but we would have to use different surfactants and solutions for other applications,’ says Dressaire.

’Studying the stability for a year is unusual: I don’t think anybody has followed microbubble stability for that long,’ comments Marjorie Longo, who has worked on stabilising small bubbles at the University of California, Davis. Other chemists were not sure that the effect would be useful - or exactly how new it was. David Needham, a materials scientist at Duke University, North Carolina, says he’s shown how slightly larger gas bubbles (20 micrometres) can be stabilised by surfactants. ’The field has also moved on substantially by using nanoparticles to stabilise bubbles,’ adds Bernie Binks, a physical chemist at the University of Hull, UK. Still, Stone is enthusiastic about the beauty of the team’s structures. ’The surface of a gas bubble, less than a micrometre across and with these fifty nanometre polygon patterns - it’s stunning.’