Surf's up for unstable electron beams

Physicists in France have used a laser to inject electrons into the wake of a plasma wave created from a jet of helium gas.

Controlling short high-energy bursts of plasma electrons is difficult. But now physicists in France have managed it, using a laser to inject electrons into the wake of a plasma wave created from a jet of helium gas.

The injected electrons ’surf’ the plasma wave, say the researchers, producing stable highly energetic and tuneable electron beams (called the laser wake-field accelerator output). The accelerator that produces the beams was created by Victor Malka and colleagues at Palaiseau Ecole Polytechnique. It fits neatly on a table top, reports the team, and has many potential applications in medicine, physics, and industry. 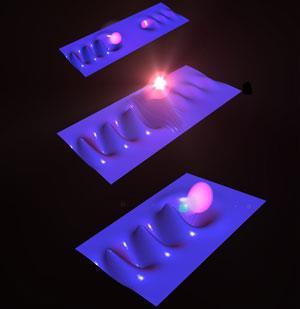 A supersonic jet of helium gas is ionised when exposed to an intense laser pulse, producing a plasma of electrons and positively-charged ions. As the pulse passes through the plasma, it creates behind it a wake of displaced electrons, just like a boat carving through water.

If the electronic wake is large enough it ’breaks’, meaning that the electrons now surf with the wave instead of helping it propagate. The wake’s electrical forces accelerate the surfing electrons up to 200MeV in just 2mm, which produces a narrowly focussed (collimated) electron beam at a specific energy.   The challenge is to reproduce these beams: energies can fluctuate by as much as 50 per cent from beam to beam. The system is so chaotic that any tiny fluctuations in laser control and gas conditions greatly influence how many electrons enter and surf the plasma wake.

Malka’s solution was to introduce another laser pulse in such a way that it collides with the first plasma-producing pulse. This creates a virtually stationary wave whose energy accelerates electrons from the plasma into the wake. Not only are these surfing electrons accelerated to relativistic energies, but now the laser wake-field output is collimated , reproducible (making it useful for different applications), and at well-defined tuneable energies between 50 and 250 Mev.

At the moment, the system is not perfect. The amount of accelerated charge in a single beam is just a few pico-coulombs, about ten times less than can be accelerated without the stabilising second laser. But David Phillips, a leading expert in laser physics and chemistry at Imperial College London, says it marks a real step forwardin stabilising laser wake-field accelerator outputs, opening several important areas of application.

’The stability and well-defined energy of these electrons promises wide use of such bench-top accelerators in basic research, medicine, and industry,’ said Phillips.   ’Tightly controlled mono-energetic electron beams could be used for radiotherapy, radiography for materials science, and in studying the femtochemistry of aqueous solutions.’