tattoo to give you the sporting edge

Hydration is incredibly important. In sport dehydration can affect your performance and decision making abilities but by the time you get thirsty you’re already dehydrated. This Saturday, Nascar racer Paulie Harraka will be using a device based on John Rogers work at the University of Illinois Urbana Champaign to monitor his hydration levels as he races.

Rogers’ device is an extension of his work presented in his Science paper last year, and consists of a ’temporary tattoo’ of flexible electronics in direct contact with the skin. He gave the update on his work to delegates at the American Chemical Society annual meeting in San Diego, US. 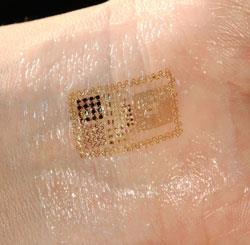 Silicon electronics are extremely useful for a huge range of uses, but are rigid and inflexible, unlike the human body. Previously, Rogers has shown that nanometre thin layers of silicon have much better mechanical properties. Forming these into snakelike bends makes circuits that not only flex and bend, but also stretch, and at such sizes the circuits can then stick onto the body using van der Waals interactions.

Roger’s circuits can be peeled from their backing and put in place using just water. They can be protected by coating them with a modified form of over-the-counter spray-on plasters or bandages, which keeps them safe from sweating, wear and tear and even being washed with soapy water.

Powered and monitored wirelessly using RF induction, the temporary tattoos last for about two weeks (until the skin they were attached to sloughs off). And because the electronics are in direct contact with the skin, they make the same connection as conventional electrodes with a conducting gel, but without the mess and irritation.

The device on Harraka will be used to monitor hydration, temperature and physical strain during the race. However, Rogers says that his epidermal electronics can be used for much more, such as measuring skin hydration for the cosmetics industry or even, a bit further down the line, controlling an external device like a prosthetic limb by tracking muscle movements.

’To me it’s really fantastic,’ says David Walt, founder of DNA sequencing firm Illumina. ’Not only does he [Rogers] have the vision, but he is able to convert that to reality. The proof is that it works.’ While Rogers is currently focusing on using his technology to measure physical properties, Walt says he would like to think that the technology can also be used to measure chemical inputs.