Teeth fight back against bacteria with graphene sensor

People who believe that their teeth are transmitting messages - perhaps from the CIA - through secret implants in their fillings can normally be dismissed as unbalanced. But Michael McAlpine of Princeton University, US, whose team is responsible for a remote chemical sensor, which really can transmit messages from the molars, is certainly not crazy.

The sensor developed by McAlpine’s team detects bacteria and can operate in rather strange places, including on the surface of teeth. The graphene-based device can spot bacteria at the level of single cells and reports this using wireless technology. His team haven’t picked up any broadcasts from the intelligence services yet, but the sensor is shaping up to be an attractive prototype for the diagnostic tools of the future. 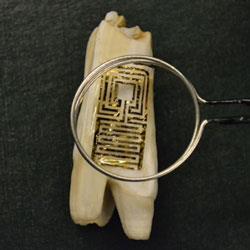 The graphene sensor can transmit messages about the tooth’s environment

The sensor represents a novel synergy between several clever materials. As well as graphene and designer peptides, a radio frequency identification tag is also part of the setup. This technology - the same type used in electronic key cards - enables wireless communication with a detector. It is the first time such a device has been interfaced directly with biological tissue.

To begin construction the chemists printed a small graphene grid onto a thin layer of transparent silk. This acted as a platform from which to transfer the graphene onto a range of substrates; not just teeth, but also soft tissues and intra-venous drip bags.

After placing the silk-graphene ’tattoo’ onto the tooth, the area was rinsed with water, dissolving the silk support to leave the ultra-thin circuitry in place. The superlative properties of graphene ensured the material adhered strongly to the surface thanks to van der Waals forces.

The next step was to attach bifunctional peptides to the graphene base layer. One end of the peptide was rich in aromatic residues and consequently bound to the graphene surface through pi-pi stacking interactions. The other end was formed from a naturally occurring antimicrobial protein (AMP), which has a strong affinity for three important bacterial strains.

When the AMPs bind bacteria, charged regions in the pathogens’ cell membranes expose the graphene to a small electric field, which modulates its conductivity. By interrogating the sensor with an external antenna, the conductance can be inferred and the bacterial concentrations determined.

McAlpine says some of the nice features of AMPs are that ’compared to antibodies, they’re much more robust’ and there are also a range of them which occur naturally. ’The ones we used were originally isolated from tropical frogs,’ he says. But in future work different AMPs could be used to target other bacteria.

The down side of the AMPs is that they didn’t prove to be particularly selective in this study. However, McAlpine says that he initially ’picked the AMPs that are easy to synthesise - in the future we could look at other AMPs, or maybe use combinations of them to get the selectivity’.

Colin Campbell, who works on biosensors at the University of Edinburgh, UK, says the work is important because the design principles could easily be adapted to sense diverse diagnostic targets. ’There are many nucleic acid aptamer sequences out there,’ he says, ’so there are a whole load of specific proteins that they could potentially measure.’

Campbell also cautioned that the work should not be judged on whether it can immediately be applied to real life problems. ’It’s not clear how well these devices will stand up to abrasion - if you were to brush your teeth, for example,’ he says. ’But the important thing here is the principle the sensor works on.’

Otto Wolfbeis, an expert on biosensors at the University of Regensburg, Germany, was also impressed with the research. He said the design’s features like wireless control, flexibility and the non-toxic nature of graphene all mean this strategy has a ’bright future’.