Concealed image in Louvre artifact revealed by terahertz spectroscopy, after other analytical techniques failed to do so 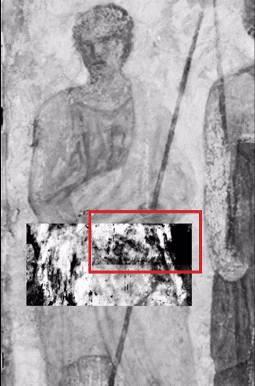 A collaboration between analytical scientists and the Louvre in France has revealed a hidden work under one of the museum’s frescoes. The research is an example of the broadening field of terahertz spectroscopy, using wavelengths of electromagnetic radiation between microwave and infrared.

The fresco, Trois hommes armes de lances, is part of the Louvre’s Campana collection – pieces that once belonged to Giampietro Campana, an excavator and collector of ancient artifacts in the 19th century. Campana was known to restore the pieces he obtained but in this case, it appears he went a step further. ‘This particular fresco was produced in the mid-19th century, either by Campana or one of his protégés,’ Bianca Jackson, a researcher from Rochester University, US, told the the 245th ACS National Meeting & Exposition in New Orleans, US. With this history, the curators had good reason to believe that the fresco might be holding some secrets. However, although a suite of methods had been applied to the fresco, none had revealed any underlying artwork. ‘X-ray radiography showed the fresco was composed of different segments, and [x-ray fluorescence] suggested that there were some pigments present that were not seen on the surface, but they failed to get an image,’ says Jackson.

Having exhausted other possibilities, the curators invited Jackson to analyse the work using terahertz spectroscopy, a relatively new application of the technique. ‘Everything had been done so they asked us as sort of a last ditch effort,’ she says. As it turned out, compared with the other techniques, terahertz spectroscopy was uniquely suited to the task. ‘X-ray is a transmission technique, so when you’ve got three to four inches of plaster and a paint layer that’s a few tens of microns, the signal of the paint is lost,’ explains Jackson. ‘Infrared reflectometry is usually pretty good with thin layers but in this case the preparation layer was too thick.’ Terahertz radiation, however, can penetrate the layers, and is reflected back at the interface of different layers, giving a depth profile of the sample. After painstakingly sampling sections of the fresco, Jackson eventually detected a small variation in the signal, revealing what appears to be the image of a face underneath the top painting.

Jackson’s discovery is itself the product of a failed attempt to uncover the underlying layers of the Mona Lisa, which continue to evade analytical investigations. ‘They can’t find the underdrawing because they believe it’s sanguine – an iron oxide pigment. Iron oxide is actually one of the worst pigments for terahertz spectroscopy to detect, but in doing the background work I found out that you get very good contrast between pigments and plaster – so I started looking at frescoes.’

David Heaps, principal scientist with Advantest, who build terahertz spectroscopy instruments, sees this as an exciting example of the way the technique is rapidly growing and finding new applications. ‘It hasn’t been used much up to now because the technology hasn’t been readily available. Now it’s coming to fruition – it’s like the wild west of spectroscopy.’