They are loved and endorsed by celebrities and dismissed as an unhealthy diet craze by critics. But ’low carb’, high protein and high fat diets have proven their metabolic worth: scientists in the US have discovered a fat-burning role for a specific hormone stimulated by these eating regimes. The work has also raised the intriguing question of whether the Atkins diet could make you live longer.

A group of researchers led by Steven Kliewer at Southwestern University in Dallas, Texas found that a growth hormone called fibroblast growth factor 21 (FGF21) stimulates fat metabolism in the liver. 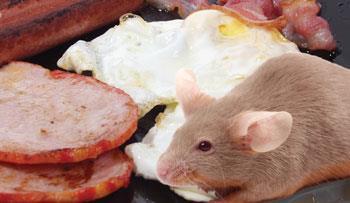 At the same time, Eleftheria Maratos-Flier and her colleagues from Boston University found that a ketogenic diet, low in carbohydrates and relatively high in fat, stimulated the production of this hormone. Both studies are published simultaneously in Cell Metabolism.

’It was one of those serendipitous discoveries,’ Kliewer told Chemistry World. ’We were studying receptors in the liver that are activated by fatty acids, and we found that the receptors, called PPAR

, regulate the hormone FGF21, so we went on to study what FGF21 does.’

Kliewer’s treated mice with FGF21, either by genetic modification or direct injection, and said that it made the animals look like they were starving. ’It turned on a starvation response, even when the animals were feeding. They switched from using carbohydrates to fat stores as an energy supply,’ he said.

Maratos-Flier’s group fed their mice a high fat, low carbohydrate diet for 30 days and found that levels of FGF21 increased.

This biochemical deception, causing the body to burn fat even when on a high fat diet, is a weight loss method made famous by Robert Atkins, who died in 2003. Such diets are called ketogenic because, without a source of carbohydrate to produce energy, fats or lipids are metabolised, producing ketones as a replacement fuel.

Although previous work linked FGF21 to metabolism, Kliewer’s work illustrates its fat burning function for the first time. ’This is one of the most exciting things I’ve ever worked on,’ he said. ’Starvation and restricted diet are linked to some fascinating physiology including longevity. In the long term, I would like to investigate the role of FGF21 in ageing, since caloric restriction has been linked to an extended life span in many species.’

David Moore from Baylor College of Medicine in Houston, Texas described the link between calorie restriction and longevity as a ’tantalising’ research area.

’When you starve an overweight body, you see many metabolic benefits, including increased fat metabolism, some of which could be mediated by FGF21,’ Moore told Chemistry World. ’There was a study described at a conference recently, where a morbidly obese child undertook a medically supervised 300 day fast. He lost half his body weight and was reported to be physically fine.’

Moore pointed out that in all species tested so far, including worms, birds, rodents and dogs, restricting calorie intake leads to a longer life span (see Chemistry World, May 2007, p24). But a long term longevity study in humans is a huge practical challenge.

Eric Ravussin from Pennington Biomedical Research Center in Louisiana has pinpointed a number of biomarkers for ageing that he says could start to answer the question of whether a ketogenic diet or FGF21 increases life span. ’This type of diet or this hormone could provide a surrogate for calorie restriction,’ he suggested.