The key to colloid assembly

US researchers have a developed a simple lock-and-key type mechanism that drives the self-assembly of colloid particles. They say their work offers a new approach for building tiny machines with movable parts.

According to lead researcher Stefano Sacanna at New York University, the team’s assembly scheme is so simple it’s ’almost embarrassing’. It centres on two types of particles - a dimpled ’lock’ and a spherical ’key’, which fit together to form something resembling a flexible ball and socket joint. ’It’s just geometry,’ says Sacanna. ’The interaction between these pieces depends on how good the fit is, and then everything pretty much comes together naturally.’

There is one more important component, however - a polymer called a depletant, in this case poly(ethylene oxide), which induces a short-range attraction between the two pieces. As Sacanna explains, his team chose a heat-sensitive polymer that would change size in response to temperature shifts, allowing them to control the mechanism. The lock and key stick together indefinitely, but if the temperature is raised, they fall apart. Thus the mechanism is not only flexible, but reversible as well. 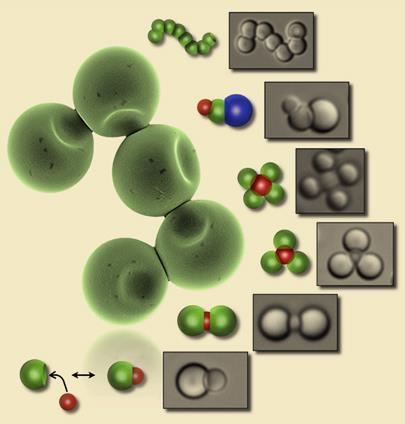 Perhaps the most challenging part of the process, says Sacanna, is making the locks. The researchers synthesise these from 3-methacryloxypropyl trimethoxysilane (TPM), which polymerises to form a hard, cross-linked outer shell, surrounding a shrinking core. As the core contracts, the shell buckles like a football that has had the air let out. Sacanna’s team fine tuned the mechanical properties of the shell in such a way that, rather than crumbling altogether, the shell acquired a dimple.

’I read this paper and said, "damn, that is simply cool",’ says Charles Zukoski, a colloids expert at the University of Illinois at Urbana-Champaign. ’A current aspiration of many teams is the formation of well-defined aggregates. This paper shows a mechanism.’ He adds that the principle of using depletant polymers opens up opportunities to build a ’galaxy’ of new structures and useful functions.

The only limit is imagination, according to Sacanna. But for now, the novelty is in the approach rather than any real life application. ’The idea was to design an assembly scheme that could give you the freedom of designing this cluster in a very simple way,’ he says. ’I guess as a practical application, you can think of designing very tiny machinery with mobile or flexible parts.’

Because the components are not held together by chemical bonds - just the pressure of the depletant polymer - it is also possible to imagine combining locks and keys with different surface chemistries, he adds.
Hayley Birch