The medicine's in the (wine) bottle

Some red wines contain such high levels of polyphenols that a single glass has equivalent bioactivity to several daily doses of an anti-diabetes drug, say Austrian scientists.

Polyphenols play a key role in the health benefits of wine by acting as antioxidants that prevent cell damage, but the other possible effects of these chemicals are not yet fully understood. Now, a group led by Alois Jungbauer from the University of Natural Resources and Life Sciences, Vienna, Austria, have shed light on this area by examining polyphenols in eight Austrian red wines. They assessed polyphenol activity towards a receptor called PPAR-gamma (peroxisome proliferator-activated receptor gamma). This receptor is present in many tissues in the body, and is primarily involved in the development of fat cells, in energy storage, and in modifying lipid and glucose levels in the blood, making it a key target for drugs for cardiovascular and metabolic diseases. 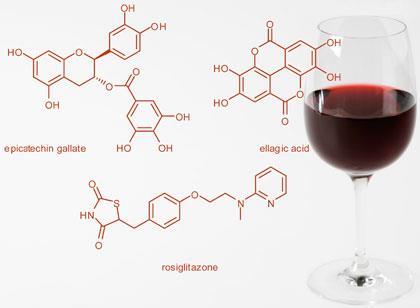 Red wines are rich in polyphenols, in particular epicatechin gallate, also found in green tea, and ellagic acid, which is found in many fruits

All of the wines were rich in polyphenols, in particular epicatechin gallate, also found in green tea,and ellagic acid, which is found in many fruits. When the team ran PPAR-gamma binding assays, they found that not only did these compounds bind to the receptor, but that the wines contained enough of them to rival the activity of the potent drug rosiglitazone, which is used to treat type 2 diabetes. One of the wines, a 2003 Blaufr?nkisch, contained particularly high polyphenol levels - just 100 mL contained levels equivalent to about four times the daily dose of rosiglitazone.

Jungbauer says that tannin-rich red wines contain more of the polyphenols, but that it is too early to come to any general conclusions about grape varieties. However, he suspects that environmental factors and wine technology have as much influence as the type of grape. He points out: ’grape tannin and oak tannin supplements are often used in wine technology as antioxidants, and are added to the mash or fermented must. These extracts are rich in polyphenols and may also be a potent source of PPAR-gamma ligands.’

Chi-Tang Ho, a food scientist at Rutgers School of Environmental and Biological Sciences, New Jersey, US, thinks that this is an ’extremely exciting’ study, and that it provides ’good experimental evidence for the potential anti-diabetic effect of drinking red wine in moderation.’ ’Grape skin extracts have great potential, and although the influence of ethanol is not yet fully understood, I am confident that it will be possible to replace some synthetic compounds by plant extracts,’ concludes Jungbauer.