The private lives of plants

Scientists in Japan have designed a microdevice to monitor the effect that chemicals have on the growth of pollen tubes.

While these events are happening around us every day, they happen on the microscale, making them very difficult to study. Previous research into plant reproduction has suggested that the direction of pollen tube growth is controlled by a gradient of attractant molecules. However, most assays spot chemoattractant onto a medium then allow it to spread, which makes it difficult to determine the exact concentration of attractant molecule at the head of the pollen tube. 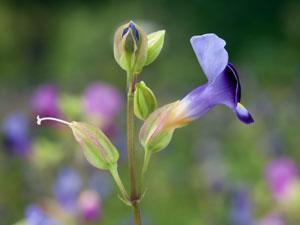 Pollen tubes from Torenia fournieri, better known as the Wishbone flower, were used to test the device

The device has a main channel that splits in two and each of these sub channel leads to a reservoir into which chemoattractants are placed. To test the device, Torenia fournieri, a perennial plant with blue, white or pink flowers, was studied. With buffer in one reservoir and plant ovaries in the other, the team confirmed that the pollen tubes inside the device did indeed grow towards the ovaries. They then went on to isolate which part of the ovary influences this attraction.

‘Our understanding of plant reproduction is still rudimentary compared with the knowledge we have of the reproductive process in humans,’ says Anja Geitmann, a plant cell biology specialist at the University of Montreal in Canada. ‘The device built by Horade and co-workers allows the investigation of the plant reproductive process at a microscopic scale. Importantly, it makes the process that is normally hidden from view visible.’

With a system to test their attractive and reproductive processes, the private lives of plants might not be so private for much longer!