The TNA world that came before the RNA one

The question of how non-living chemicals emerged from the so-called primordial soup to give rise to life on Earth is one of the most intriguing in science. Finding an answer might not only help explain our origins but could give us important clues as to that other intriguing question of whether or not we are alone in the universe.

Once it was recognised that DNA is key to the molecular self-replication that underpins life, chemists have sought to understand the origins of this double-helical molecule in that primordial age. It was quickly assumed that RNA, a single-stranded nucleic acid, may have been the precursor genetic material to DNA, and the RNA world hypothesis was born. But what gave rise to RNA? Chemists in the US are starting to home in on another nucleic acid, TNA: threose nucleic acid. 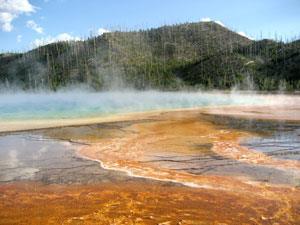 Primordial life may have used TNA as its genetic material

John Chaput and colleagues at Arizona State University in Tempe, explain that TNA is, in some senses, chemically simpler than RNA and, although it is considered a potentially natural derivative of that molecule, there are hints that it may have been the primordial precursor. Despite its simplicity it can exchange information with RNA by forming complementary strands with itself and with RNA as demonstrated by Albert Eschenmoser and colleagues at ETH Zurich, Switzerland.1 However, there is one characteristic of TNA that has not been observed to date but would be essential to allow the progression from a putative TNA world to one based on RNA: the ability to undergo tertiary folding into novel functional structures that bind ligands and catalyse reactions.

’Threose, which has one fewer carbon atoms than ribose, is simpler than RNA not because it has fewer atoms, but rather because it can be synthesised from a single starting material,’ explains Chaput. It is difficult to design functional nucleic acid molecules from first principles, he adds, so his group used in vitro selection to evolve a population of TNA receptors that could bind to an arbitrary target. In the present work, the team used the clotting protein thrombin as the target. The process was made possible by the development of polymerase enzymes that can transcribe strands of DNA into their TNA counterparts. The present study builds on a decade’s worth of effort to develop the chemical technology that allows a TNA combinatorial library to be evolved.

TNA can fold into complex shapes and is complementary to RNA

The researchers have now demonstrated that these selected TNA molecules can fold into complex shapes with discrete ligand-binding properties.2 Fundamentally, the work demonstrates a property of TNA that was not clear before the team began but was known, of course, in RNA and DNA. ’This provides evidence that TNA could have served as an ancestral genetic system during an early stage of life,’ Chaput tells Chemistry World.

’This is exciting work,’ says Steven Benner at the Westheimer Institute of the Foundation for Applied Molecular Evolution, US. ’We have found that threose, the backbone of Chaput’s new DNA, is one of the sugars that (like ribose) is stabilised by borate minerals, so this makes it also a candidate for a prebiotic carbohydrate.’