The trouble with antibiotics

Eighty years ago a mouldy Petri dish changed the face of medicine, and Alexander Fleming's discovery of penicillin spurred a golden age of antibiotic research

Eighty years ago a mouldy Petri dish changed the face of medicine, and Alexander Fleming’s discovery of penicillin spurred a golden age of antibiotic research. But today, so-called superbugs are front page news and the antibiotic development pipeline is lamentably thin.

Some of the largest pharmaceutical companies have simply bowed out of what has become a tricky market. Experts now say that without improved R&D approaches, along with better regulation and controlled use of antimicrobials, their future could be in jeopardy. 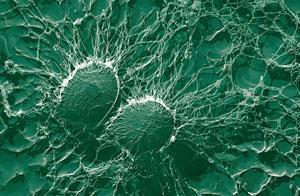 Speaking at ’Antibiotics - where now?’, an RSC conference held in London, UK on 21 January, Steve Projan, head of biological technologies at Wyeth Research in Cambridge, Massachusetts, US, said that drug developers had, in the past, underestimated bacteria. ’Your ability to discover novel antibacterial agents is inversely related to the size of your ego. The industry has been looking at the genomics of these bacteria, and screening potential antibacterial agents against these targets,’ he said. ’This has failed for all types of targets, because bacteria have had billions of years of evolution to cope with harsh environments - they can withstand chemical attack.’

This failed approach is evident in the obvious innovation gap between 1960 and 2000, added Christopher Walsh, a biological chemist at Harvard Medical School, Boston (see timeline). During that period, only three new classes of antibiotics were approved.

The limited number of antibiotic classes means that all drugs in use continue to target the same group of mechanisms, attacking four chinks in the bacterial armour: cell membrane synthesis; protein synthesis; DNA/RNA precursor synthesis; and DNA/RNA synthesis. Since some bacterial strains have developed resistance to all these methods of attack, new tactics are desperately needed.

But the researchers don’t think all is lost. ’Although no new class of antibiotic has achieved proof of concept in humans at this point, I believe there is hope,’ said Projan.

A combination of biosynthesis and medicinal chemistry is proving to be an effective approach to antibiotic development, producing new generations and derivatives of existing drugs. According to Projan ’there is still a lot of play in our existing chemical equity’.

This equity is being exploited by Peter Leadlay from the University of Cambridge, UK, who develops antibiotic compounds from natural products called polyketides. Polyketide derivatives have been in clinical use for many years, but Leadlay has shown that the compounds can be improved by exploring their biosynthesis.

’You can’t tell which of these organisms are going to be good, so we should try them all - there is untapped potential here for chemical diversity,’ he said. ’By changing the genomes of organisms that produce polyketides, we can get them to produce different types of chemicals with, for example, better binding properties.’

Expanding doctors’ antibiotic arsenal could also help to develop combination therapies, added Walsh, a tactic that is already commonly and effectively used to treat cancer and HIV, and should be more widely employed against bacterial infections. 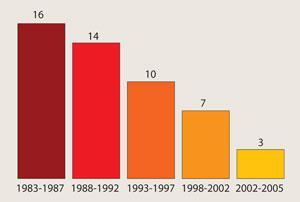 New antibacterial agents approved in the US

Jun Wang, a scientist at Merck’s research laboratories in Rahway, New Jersey, US, is pursuing new targets that could herald a new antibiotic class targeting fatty acid biosythesis, a process essential for bacterial growth. Wang’s group has discovered two natural products that inhibit this synthesis - platensimycin and platencin - both extracted from Streptomyces platensis, a bacterium isolated from South African soil samples. Both products have so far shown activity against a broad spectrum of disease-causing bacteria.

But even with a few promising avenues of research, the current market for antibiotics is commercially uninspiring for drug developers. ’It’s a confused market place, crowded with generics,’ said Projan.

Wang told Chemistry World  that prescription of a broad-spectrum antibiotic, such as the drug he is aiming to develop, should be held back as a last resort. ’The regulators don’t want it to be prescribed too widely because of resistance,’ he explained. But that means lower sales, alongside all-too-brief patent protection.

Hajo Grundmann from the European Antimicrobial Surveillance System, part of the Dutch government’s National Institute for Public Health and the Environment, described antimicrobial resistance as ’a tragedy’.

’The restriction on prescription of antibiotics that has been caused by resistance is taking the gain out of R&D,’ he said. Diminishing returns in the antibiotic marketplace have led many pharmaceutical companies, including Sanofi-Aventis and Bayer, to leave the field altogether.

Grundmann called for an orphan drug programme for new antibiotics that would accelerate them through the regulatory process. He stressed that in the developing world, where poor sanitary conditions exacerbate the spread of infections, new antimicrobials are even more crucial.

’Small biotech companies are aiming to fill the gap, along with charitable funding organisations such as the Wellcome Trust that are prepared to take the risk,’ Walsh told Chemistry World. ’So what you see are small pharmaceutical companies going for niche markets, then turning to partnerships with big pharma companies that have the money to take their drugs through clinical development. It’s an enormous effort to advance a single compound, and drugs are stalling on the escalator towards clinical development.’

’If we get to a stage where no pharmaceutical partners can be found for the small biotechnology companies that are developing the drugs, then we really will have a problem,’
he added.