Recent research has focused on minimising heat transfer through the material using nanostructures that hinder the motion of heat-carrying phonons (lattice vibrations). But a team led by Joseph Heremans at Ohio State University have now demonstrated a new approach.

Heremans’ team added small amounts of thallium into lead telluride thermoelectric cells (which are used for niche commercial applications such as lunch box coolers). With thallium atoms replacing 2 per cent of the lead in the material, the thermoelectric efficiency doubled, making the material more efficient than anything currently on the market. Importantly, it works best at a range of temperatures similar to those produced by automobile engines. 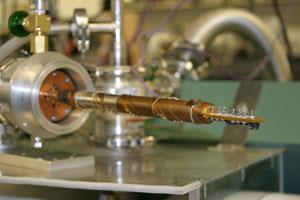 Thermoelectric material installed in the cryogenic instrument used for testing

’Our material is currently being evaluated by Amerigon, the world’s largest manufacturer of thermoelectric devices, for incorporation into an automotive waste heat recovery system,’ Heremans told Chemistry World. Such systems, Heremans says, could be seen on the market within four years.

The idea of thallium doping was based on quantum mechanical calculations that suggest group III elements such as thallium can combine with neighbouring tellurium atoms to create a narrow range of additional energy levels that current-carrying electrons can occupy - so improving electrical conductivity.

The research suggests other elements could be used to improve different thermoelectric materials in the future. ’Thallium works very well with this setup but we don’t know yet which elements could work in a similar way with other materials,’ says Jeff Snyder, who worked on the project at the California Institute of Technology.

One of Snyder’s colleagues is James Heath, who demonstrated the potential of silicon nanowires as effective thermoelectric materials earlier this year. Using silicon would be a much cheaper alternative to the exotic metals that are currently used. Heath’s silicon nanostructures reduce thermal conductivity, an effect independent of Heremans’ thallium trick. ’We are very optimistic that these two effects will add together to achieve even higher efficiencies,’ says Snyder.

’I think this is quite a significant result,’ says Gang Chen, an expert in thermoelectric material design at Massachusetts Institute of Technology. ’I can imagine the potential of combining this process with other materials, so we are definitely making inroads towards some useful commercial applications.’