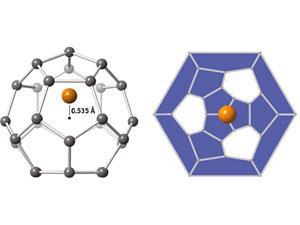 An international team of researchers has observed the smallest fullerene to form spontaneously to date using metal atoms for stabilisation. It is now possible that the fullerene, which contains 28 carbon atoms surrounding a single atom of titanium, zirconium or uranium, could be tested for desirable properties such as high-temperature superconductivity, the researchers say.

Fullerenes are molecules containing only carbon – either enclosed as in a sphere, or open-ended as in a nanotube. The first fullerene, buckminsterfullerene, was discovered in 1985 and was a spherical shell containing 60 carbon atoms. Since then, scientists have been interested to create smaller spherical fullerenes. The smaller the fullerenes’ size, the greater their surface curvature, and the more unusual their properties should be. In particular, the spherical fullerene containing 28 carbon atoms, C28, has been predicted to exhibit various exciting properties such as room temperature superconductivity.

Unfortunately, the high curvature of smaller fullerenes makes them highly reactive: the carbon atoms are truly stable only when they are bonded flat, as in a sheet of graphite, where they can satisfy their 120° bonding requirement. A high reactivity means they are difficult to detect experimentally. Scientists know that C28 should be rendered more stable by encapsulating metal atoms – technically, ‘endohedrally doping’ C28 with metal atoms – but in gaseous experiments such molecules have been difficult to pick out among other spontaneously forming, non-fullerene molecules.

Now a team led by Harold Kroto, a chemist at Florida State University who shared the 1996 Nobel prize for chemistry for his co-discovery of fullerenes, has overcome this problem. Kroto’s team used a laser to vaporise the end of a carbon rod that had been lightly doped with titanium (Ti), zirconium (Zr) or uranium (U). Then, using a technique known as Fourier transform ion cyclotron resonance (FT-ICR) mass spectrometry, the researchers studied the resultant carbon vapour’s spectra. The FT-ICR mass spectrometry offered enough resolution for the researchers to pick out C28 endohedrally doped with single metal atoms: M@C28 (where ‘M’ is Ti, Zr or U).

Kroto says that M@C28 might be sufficiently stable to be extractable, which would enable scientists to test its properties. The high curvature of C28 leaves four of its carbon atoms ‘pyramidalised’ or protruding from the structure, and therefore able to bond with other species. In this way, C28 should act rather like a giant carbon atom, bonding tetravalently like normal carbon atoms in diamond. Such a ‘diamond-bonded’ C28 material has been predicted to exhibit superconductivity, possibly at high temperatures – now, perhaps, this prediction can be tested.

Theorist Thomas Heine at Jacobs University Bremen in Germany is not convinced Kroto and colleagues’ method can produce large amounts of M@C28 since the molecules would probably react were they not in the gas phase. ‘I doubt that “bottleable quantities” of those materials will be available in future,’ he says. Physicist Bernd von Issendorff at the University of Freiburg in Germany agrees, saying that applications of M@C28 would require chemical synthesis methods of production.

Nevertheless, von Issendorff believes the work of Kroto’s team is an important step forward. ‘The report is a nice piece of work, which adds another puzzle piece to the solution of the – in my view – still unsolved mystery of fullerene formation,’ he says.