Chinese researchers have shown for the first time that nanomaterials made from titanium dioxide (TiO2) can be used in cigarette filters to significantly reduce the amount of harmful chemicals inhaled by smokers. They say it offers a cheaper and safer alternative than using carbon-based nanomaterials and show potential for use in other filtering devices including gas masks and air purification systems.

Current cigarette filters are made from cellulose acetate, which absorbs some of the toxic and carcinogenic compounds present in tobacco smoke, including tar, nicotine, polycyclic aromatic hydrocarbons and tobacco-specific nitrosamines. In recent years, scientists have attempted to improve standard filters by adding nanomaterials, including carbon nanotubes or mesoporous silica, to capture more of these chemicals. But these experimental methods remain expensive and could pose unknown health risks. 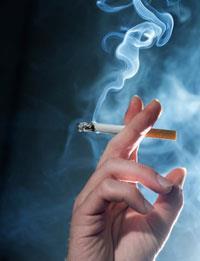 Amounts of harmful compounds inhaled by smokers including tar, nicotine, ammonia and hydrogen cyanide can be reduced by the filter

Since these nanomaterials can be easily synthesised using titanium dioxide as a precursor under mild conditions, Wei says they are much cheaper to produce than other materials. What’s more, since TiO2 is already widely used in consumer products including sunscreens, cosmetics and food, the team is confident that titanate nanomaterials used in filters do not pose a health risk to smokers by inhalation.

Using standard methods, the team synthesised titanate nanosheets and titanate nanotubes and added them to the filter tips of cigarettes. After machine smoking them and capturing the smoke condensates on filter pads, the team used various methods including ion chromatography and high performance liquid chromatography to measure the amount of different captured chemicals. They discovered that the tube additives were around twice as efficient as the sheets at capturing harmful compounds.

’The results are quite interesting and could be potentially very useful in this area of filtering applications,’ says Dmitry Bavykin who investigates titanate nanomaterials at the Universtiy of Southampton, UK. However, he is unconvinced that the difference in absorption properties of the tubes and the sheets can be attributed to the nanotubes acting like a chromatographic column. ’In my view, the difference between the tubes and the sheets can be associated with the differences in specific surface area of these materials.’