To boldly go where no chemist has gone before

Studying the interactions between different molecular fragments is taking researchers to the uncharted regions of chemical space.

Studying the interactions between different molecular fragments is taking researchers to the uncharted regions of chemical space. 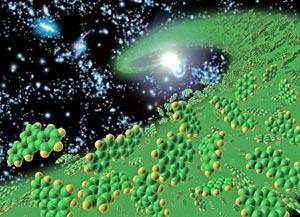 Chemical space, consisting of all possible stable molecules, is mind-bogglingly vast. Theoretical chemists have calculated that there are more possible molecules based on hexane (1029) than there are stars in the visible universe. Chemists have only made fairly tentative journeys into this space, with the largest chemical databases currently containing up to 25 million different molecules.

Ad IJzerman from Leiden University, the Netherlands, and colleagues realised that analysing these chemical databases could reveal which regions of chemical space have been extensively explored and which remain relatively uncharted.

IJzerman’s team split the 250 000 molecular structures contained in the US National Cancer Institute’s database into component fragments, consisting of rings, substituents and several types of linkers.

This generated 65 000 different fragments, of which the vast majority (70 per cent) occurred only once. The chemists selected the 1730 fragments that occurred in more then 20 different molecules and calculated the number of times that each possible pair of fragments occurred in the same molecule.

Some pairs of fragments were commonly found together, forming what the researchers termed ’chemical clich?s’, but others were rarely found in the same molecule. By generating molecules containing the fragments that aren’t often brought together, predict the researchers, chemists should be able to open up new areas of chemical space and potentially discover new molecules with interesting properties.

IJzerman has already demonstrated the benefits of this fragment analysis to a medicinal chemist. She was having problems with a particular compound and he suggested possible alternative ring systems, based on his list of the most popular ring fragments. ’It turned out that one of our top 40 ring systems was actually her intended modification, reached after much deliberation,’ he told Chemistry World.