US chemists have discovered that using water instead of organic solvents is the key to understanding how algae make toxins called ladder polyethers1.

Brevetoxin B, gymnocin B and related toxic marine natural products are some of the most complex structures ever isolated from nature. But their structure of repeating oxygen-containing rings suggests a fairly simple biosynthesis, involving zipping up a long chain molecule. Koji Nakanishi, who isolated brevetoxin B in 1981, proposed in 1985 that a cascade of epoxide-opening reactions could explain how these seemingly complex structures are made2.

But until now, attempts to recreate this cascade in the lab have predominantly yielded the wrong product - producing five-membered rings, rather than the six-membered rings of the natural product. However, Tim Jamison and Ivan Vilotijevic at the Massachusetts Institute of Technology, US, have now found that the solvent used in the reaction is crucial. When the reaction is done in water - as it is in nature - rather than in organic solvents, it is almost exclusively the six-membered product that is formed. 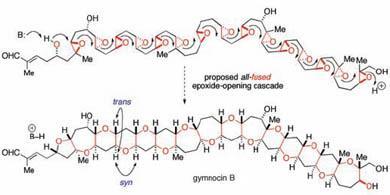 ’Over the time we were studying these reactions, we kept noticing spurious results - that any reaction with water present gave anomalously high amounts of the desired compound,’ Jamison told Chemistry World. ’But the biggest surprise was when we found that pure deionised water, with all the reaction promoters stripped out, worked best of all.’

Jamison attributes the effect of the water to hydrogen bonding effects - non-covalent bonds between water molecules and the starting material - which hold it in the right conformation for the six-membered ring to form. Aside from water, the reaction also relies on the first six-membered ring being pre-formed before the cascade starts to act as a template to guide the subsequent ring closures, said Jamison.

While the results clearly provide evidence for Nakanishi’s hypothesis, whether the reaction conditions exactly mimic what happens in nature isn’t yet clear. If the biosynthesis is catalysed by an enzyme, Jamison suggests that the effect of the template could be mimicking the geometric constraints of the enzyme active site. As to the water molecules, they could be replicating the hydrogen-bonding effects of key atoms within the enzyme active site.

The next piece of evidence in the puzzle would be to identify the enzyme in question. ’We’re currently collaborating on a fishing exercise - using the small molecules we’ve made as probes, attached to a solid support, to try to isolate the enzyme,’ said Jamison.

The MIT team is also planning to look at applying the water-based chemistry they’ve developed to make other molecules. ’We think this will be a useful reaction,’ said Jamison. ’We’re looking for other templates that have the same effect. We’re also planning to develop templates that you could use as a synthetic handle after the cascade to further elaborate the molecule, or that you could remove like a protecting group to reveal other functionality.’

Sean Bew, who works on natural product synthesis at the University of East Anglia, UK, says that the real beauty of the work lies in its simplicity. ’Previous syntheses of these molecules relied on complex catalysts or directing groups to get the product,’ he added. ’Jamison’s elegant approach, which uses starting materials that are really simple to make, opens the synthesis up to everyone.’