Tracking chemical changes in the brain 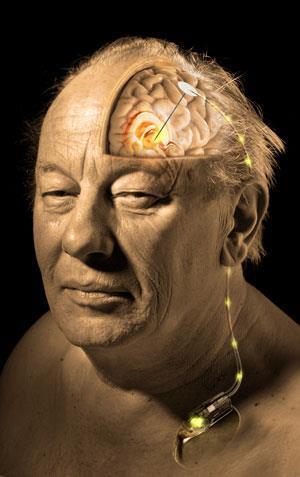 An insight into how deep brain stimulation (DBS) works at a cellular level has been obtained thanks to electrochemistry. It is hoped that this information can be used to improve this medical treatment.

DBS is a well established technique for treating the symptoms of neurological diseases such as Parkinson’s, essential tremor and dystonia. It is often coined a ‘brain pacemaker’ and involves delivering minute electrical pulses to very specific areas of the brain, with the intention of reducing specific symptoms – such as tremors – of certain neurological diseases. While widely used, our understanding of how this technique works is still poor.

A group led by Su-Youne Chang at the Mayo Clinic in Rochester, US, have sought to improve this by developing a technique to measure the levels of neurotransmitters – in this case adenosine – in the brain during DBS. ‘Previous work found that an adenosine agonist decreased tremors showing that adenosine plays a crucial role in tremor behaviour,’ explains Chang.

The researchers carried out the research on seven patients with essential tremor. The traditional DBS ‘system’ consists of an electrode implanted in the brain and a pulse generator implanted in the shoulder blade, which sends a regular electrical signal to the electrode at a voltage and frequency set by a clinician. Chang’s system involves implanting an extra electrochemical – sensing – electrode in the brain.

When the sensor detects adenosine, the voltage passing through the sensor changes and this can be detected – and measured – using fast-scan cyclic voltammetry. The electrochemical technique is able to measure the concentration of adenosine in the area of the brain 10 times per second. ‘We found that when adenosine was detected the tremor decreased,’ says Chang.

As well as improving understanding of adenosine’s role in tremors, it is hoped that this work will eventually lead to an autonomous device that changes the frequency and voltage of the electrical stimulation in real time in response to the levels of various neurochemicals detected in the brain. ‘At this moment our system just measures the changes, it is not able to feed that information to the stimulator yet. But that is our ultimate goal,’ says Chang. Optimising the electrical stimulation in real time should improve the patient’s response to the treatment, she explains.

David Linden, an expert in neuroimaging at Cardiff University, UK, says that having a better idea of what deep brain stimulation does ‘to brain chemistry will be very interesting in terms of monitoring patients and understanding effects and potentially optimising and even individualising the treatment. If you could turn it into a closed loop system where you integrate the information from a chemical sensor into your stimulation protocol and adjust it in this way that would potentially be very useful.’