Tuning into a radio solution to money forgers

Scientists in Saudi Arabia have fitted radiofrequency identification (RFID) tags to banknotes to prevent counterfeiting. ’Current anti-counterfeiting measures are limited to features like holograms, fluorescent inks, special threads, watermarks, raised printing, etc,’ says lead researcher  Husam Alshareef from the King Abdullah University of Science and Technology (KAUST). ’But most of these features can be replicated. The next generation of security features has to have some sort of electronic circuitry such as RFID tags.’ 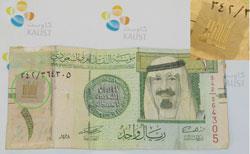 Passive RFID tags are already in common use in chips for pet identification, vehicle passes to pay tolls and as replacements for barcodes in library books. They have no power source but can transmit a unique identity signal when activated by radio waves. In this way, bank notes could be checked for unique security information, which should be very difficult to forge. The key problem for banknotes, however, is how to attach the RFIDs to the rough, flexible surface.

Alshareef’s team tackled this problem by preparing an RFID tag based on ferroelectric organic polymers, which possess high polarisation that is reversed when an external field is applied to create the on/off switch. The tags were built up on a smooth layer of polydimethylsiloxane which covers the rough banknote surface and absorbs bending movements to protect the RFID layers above from strain.

A ferroelectric transistor memory device was made by adding a layer of the conductive polymer poly(3,4-ethylenedioxythiophene) poly(styrenesulfonate) doped with dimethyl sulfoxide to increase its conductivity. This layer acted as bottom gate electrodes and was covered by a layer of the ferroelectric poly(vinylidene fluoride trifluoroethylene) then a layer of pentacene as the active channel conductor. Finally, gold was added to produce source and drain electrodes.

A/cm2). The polymer electrodes operate well at frequencies which are sufficient for basic logic operations.

However, the RFIDs cannot be incorporated into the ink used to print banknotes because the devices need to be patterned and produced individually. But Alshareef says that ’the raw materials used are not very expensive. It is conceivable that these memories can be produced at a cost of less than 10 cents per unit.’

’The development of a new method of putting ferromagnetic elements on paper is certainly interesting and has the potential to be used in a number of memory applications and anti-counterfeiting schemes,’ says George Whitesides, who works on paper-based microfluidic devices at Harvard University, US. ’Currency is a particularly difficult target, because of the physical abuse it gets like folding, scraping and tumbling.’