US researchers have designed compounds containing lanthanide metal centres that detect a range of carbohydrates, glycolipids and phospholipids, including important disease biomarkers. The compounds can be tuned to detect different biomolecules by changing the lanthanide metal. 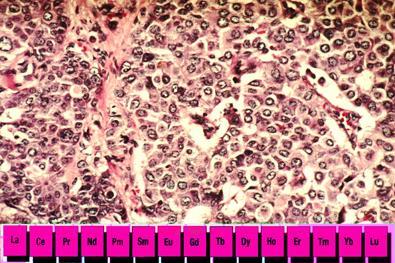 The inspiration for these novel compounds came from lectins, a family of receptor proteins that specifically bind with carbohydrates. For many lectins, this binding involves an interaction between the carbohydrate and calcium ions in the centre of the lectin. Lanthanide metals (from lanthanum to lutetium) have similar properties to calcium, which prompted the researchers from Louisiana State University, Baton Rouge, to develop artificial versions of lectins with lanthanide metal centres.

They first synthesised a salophene-lanthanum compound and found that it bound specifically with neutral carbohydrate molecules such as glucose, maltose and maltotriose. These sugars are naturally fluorescent, but the researchers found that the fluorescent intensity increased on binding with the salophene-lanthanum compound, providing a simple way to detect the sugars.

By replacing lanthanum with europium, a fellow lanthanide metal, in the centre of the salophene compound, the researchers found that the compound did not bind with carbohydrates, but instead bound with specific glycolipids and phospholipids. These included sialic acid-containing gangliosides, which are important components of nerve cell membranes, and lysophosphatidic acid, which is a potential biomarker for ovarian cancer. Again, this binding caused an increase in fluorescence intensity.

Philip Britz-McKibbin, an analytical chemist at McMaster University, Canada, who researches biomarkers, welcomed the creation of these ’tuneable synthetic receptors’ and said that it could lead to ’the development of chemical sensors for disease prognosis and early detection’.
Jon Evans