More than a month since the Deepwater Horizon oil rig exploded off the coast of Louisiana in the US, efforts are still underway to stop thousands of litres of oil a day spilling out from the well a mile down on the ocean floor. The operation to clear up the spill, and limit its environmental impact, has involved a massive and unprecedented use of oil spill dispersants - blends of surfactants and solvents designed to prevent oil slicks by breaking up the oil.

The dispersants break down the oil into smaller droplets which then mix with the water column and are rapidly diluted. Bacteria and other microscopic organisms then eat away at the oil within the droplets. 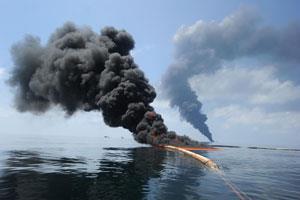 The two dispersants being used to combat the spill are Corexit 9500 and Corexit 9527A, both made by the water treatment company Nalco in Napierville, US. Their chemical makeup is proprietary information, but according to a 2005 National Research Council (NRC) report Corexit 9500 (developed in the 1990s) contains a mixture of nonionic (48 per cent) and anionic (35 per cent) surfactants.

However, using the dispersants comes at an environmental cost that had to be weighed up by the Environmental Protection Agency (EPA), National Oceanographic and Atmospheric Administration (NOAA) and other government agencies.

The dispersants are low in toxicity and break down in a matter of weeks rather than the years that oil could take to degrade, but the chemicals spread the oil further potentially exposing more sea life. The agencies decided that using dispersants at sea was preferable to allowing the oil to come ashore where it would have a more devastating effect on wildlife and fisheries.

This is the first time such chemicals have been deployed below the surface of the sea. Injecting dispersants at the source of the leak is a new approach that required rapid evaluation.

On 14 May, the EPA announced that following a series of tests the agency had given BP (the company who own the oil well) the go ahead to use the dispersants beneath the water at the source of the leak. This approach, the agency said, will use less dispersant than would be needed at the surface.

’Dispersants are not the silver bullet,’ said EPA administrator Lisa Jackson as the news was announced. ’They are used to move us towards the lesser of two environmental outcomes. Until the flow of oil is stemmed, we must continue to take any responsible action that will reduce the impact of the spill.’

The EPA reserved the right to withdraw the use of sub-surface dispersant at any time if it concludes the impact on the environment is too great. According to the rules governing the use of the sub-surface dispersants issued by the EPA to BP, the company must monitor oil spread, droplet size, toxicity, dissolved oxygen and other physical characteristics such as conductivity, temperature and depth, and report back to the EPA daily.

Scientists will use fluorometers to determine where the oil has spread and analyse its chemical signature to establish whether it is being broken down chemically by the dispersants, or mechanically, by the action of waves or underwater mixing.

Though little may currently be known about the long term impact of dispersants deep beneath the ocean surface, with millions of litres of oil continuing to flow from the wrecked oil rig, the dispersants are being seen as the lesser of two evils.