The possibility of using surfactants to treat oil on the ocean floor, at the source of the leak in BP's well in the Gulf, is being tested

More than two weeks after the Deepwater Horizons oil rig exploded off the coast of Louisiana in the US, efforts are still underway to stop thousands of litres of oil a day spilling out from the well a mile down on the ocean floor. The operation to clear up the spill, and limit its environmental impact, has involved a massive and unprecedented use of oil spill dispersants - blends of surfactants and solvents designed to prevent oil slicks by breaking up the oil.

Aircraft and boats have released nearly 160,000 US gallons (605,660 litres) of dispersant at the surface of the ocean so far, with an additional 230,000 gallons available for use, according to the Deepwater Horizons Joint Information Center in Robert, Louisiana - a one-stop information centre for the spill, representing BP (the oil company who own the well) and a number of US government agencies. 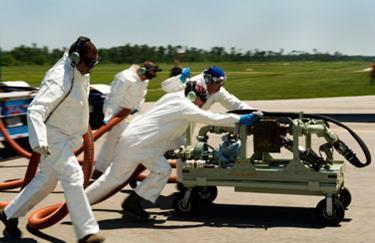 When deciding to approve the use of dispersants on the ocean surface, the Environmental Protection Agency, National Oceanographic and Atmospheric Administration (NOAA) and other government agencies had to calculate the environmental trade-off, Charlie Henry, NOAA scientific support coordinator said during a press conference on 3 May.

The chemicals are low in toxicity, but spread the oil further potentially exposing more sea life, said Henry. The agencies decided that using chemicals at sea was preferable to allowing the oil to come ashore where it would have a more devastating effect on wildlife and fisheries, he explained.

The possibility of injecting dispersants deep underwater near the source of the leak is also being evaluated. Describing the results of a recent test, Tony Hayward, BP’s chief executive, said: ’for the first time in the history of the industry we’ve deployed dispersants at the source of the leak and it appears to be having a very significant impact.’ A number of government agencies would have to give their approval before the deepwater tests could be scaled up. 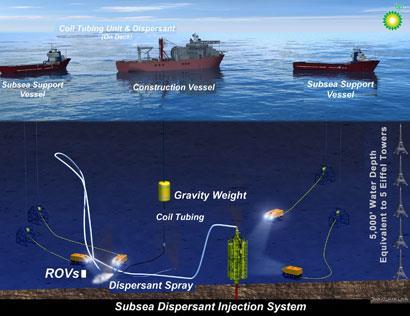 Testing use of dispersants underwater

The Joint Information Center has announced that the two dispersants being used to combat the spill are Corexit 9500 and Corexit (R)EC9527A, both made by the water treatment company Nalco in Napierville, US. Their chemical makeup is not known for proprietary reasons, but according to a 2005 National Research Council (NRC) report Corexit 9500 (developed in the 1990s) contains a mixture of nonionic (48 per cent) and anionic (35 per cent) surfactants.

Early dispersants were solvent-based degreasing agents and were highly toxic to aquatic organisms. Today’s dispersants are much more environmentally-friendly and are calculated to be approximately 10 times less toxic than untreated dispersed oil.   According to the NRC report, the acute lethal toxicity of chemically dispersed oil now comes mainly from the dispersed oil, not the dispersants.