The Moon could be richer in volatile elements than previously thought, say US researchers.

Samples of a mineral present on the Moon and on Earth have been found to contain almost the same concentrations of hydrogen, chlorine and sulfur, adding weight to questions over how the Moon formed and evolved.

The interior of the Moon was generally believed to be depleted of volatile elements as they were thought to have escaped into space during the Moon’s formation. But new techniques for analysing samples have recently helped scientists find evidence of water and other volatiles locked inside lunar rock and minerals. 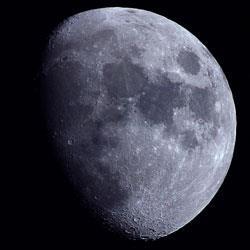 Now, Jeremy Boyce at the California Institute of Technology and colleagues at other US institutions have bolstered claims that the Moon contains a significant amount of volatiles including water by analysing a mineral called apatite.1

Apatite accepts volatile elements into its crystallographic structure and is ubiquitous in trace amounts in lunar rocks, making it an ideal mineral to study the Moon’s volatile element inventory.

Using secondary ion mass spectrometry (SIMS), the researchers measured concentrations of hydrogen, chlorine and sulfur in apatite contained in moon rock samples and discovered that the concentrations of these elements are indistinguishable from apatite found in terrestrial igneous rocks. ’This was unexpected because Earth is wet, and rich in chlorine and sulfur, so we’d expect the apatites from the Earth and Moon to be very different,’ says Boyce.

’The results tell us that conditions existed in lunar rocks that could create apatite crystals that are very similar to those apatite crystals that grew from "wet" magmas on Earth,’ continues Boyce. ’So we know the Moon has at least a little bit of water and these other volatile elements. But how much exactly is a matter of some debate.’

Last month Francis McCubbin at the Carnegie Institution for Science in the US and colleagues published similar work on lunar apatites, suggesting that there could be at least 100 times more water in the Moon’s minerals than previously estimated.2

While the new study corroborates McCubbin’s findings in terms of elevated abundances of H and Cl in lunar apatite, he says that the sulfur content is a new contribution. ’The presence of sulfur in the apatite could help scientists understand how the abundances of sulfur varied in different types of lunar magmas and ultimately whether or not sulfur played a significant role in driving lunar volcanism,’ he explains.