Anyone who has ever been stung won’t be surprised to learn that an angry wasp packs its own chemical arsenal. But a group at the University of Nottingham, UK has developed a new technique to take chemical measurements during one-on-one wasp combat, which has enabled the researchers to identify a wasp’s chemical weapon of choice when it’s losing a fight.

Ian Hardy and his colleagues pitted bethylid wasps (Goniozus legneri) against each other in a miniature gladiatorial arena. Using a version of mass spectrometry called atmospheric pressure chemical ionization mass spectrometry (APCI-MS), they were able to detect chemicals released by the insects as they fought. 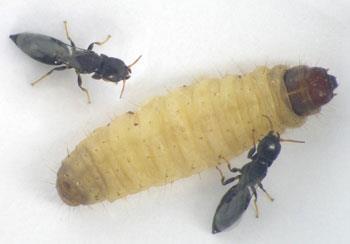 Chemical gladiators: wasps battle it out for their grand prize

The chemical released by the wasps was identified as the spiroacetal 2-methyl-1, 7-dioxaspiro [5.5] undecane, a particularly volatile substance which has been previously identified as a secretion from some species of bee and beetle. By staging and chemically recording these insect sparring matches, Hardy’s group has provided clues about how G. legneri  use this chemical.

’It’s released by the losing wasp only during more aggressive encounters so we think that it’s a rearguard weapon rather than a signal,’ said Hardy. He suggested that the losing wasp releases the chemical to protect itself from further attack, describing it as a kind of ’insect version of mace or pepper spray’.

This is the first published study that uses the APCI-MS technique to take real time measurements of a ’chemical conversation’ between animals, Hardy said. The work appears in this week’s issue of Proceedings of the Royal Society B.

Female wasps were made to compete over a larva which they use as a host for their eggs. One of the wasps was designated as the ’owner’ of the host larva and allowed access to it for 24 hours prior to the encounter. The two wasps were then put into a chamber with the larva where the ’owner’ wasp protected their larva against an attack by the other.

Hardy told Chemistry World  that he was introduced to the APCI-MS technique by accident after it was developed by two co-authors of the study, Robert Linforth and Andrew Taylor.

’We work in the same faculty where I’ve been studying the competitive behaviour of these wasps. I found out about their machine and realised that it could be a good way to identify the chemical that the wasps released,’ said Hardy. ’Because of the capacity of this machine, we were able to take it one stage further and measure the chemical release in real time.’

John Pickett from the Rothamsted research centre in Hertfordshire, UK, previously used the same technique, in unpublished work, to successfully record the release of an alarm pheromone in aphids. ’This is a very interesting piece of work, and the technique certainly works very well for this type of experiment,’ he said.

A pheromone a day keeps the midges away

Chemical ecologists have taken a key step towards understanding the sex life of a notorious insect pest. The discovery spells good news for apple growers.