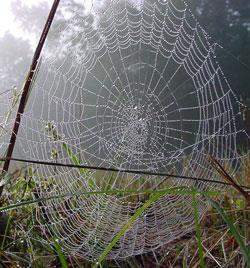 Synthetic fibres modelled on spider silk threads can now be spun continuously, like cotton onto a spindle. The scientists behind the technique plan to use it to weave artificial webs that could harvest moisture from fog in areas of low rainfall.

When fog condenses on a spider’s web it creates a stunning beads-on-a-string effect. In 2010, a Chinese team proposed that droplets are driven towards bumps in the structure of the threads and that these bumps are crucial to their water-collecting capabilities. The researchers replicated the structures in artificial silks. Now Yongmei Zheng at

Beihang University in Beijing and colleagues have come up with a way to make their bioinspired fibres in bulk.1

In previous experiments, Zheng’s team simply dunked lengths of nylon fibre into poly(methyl methacrylate) (PMMA) solution. Their new technique uses a motor to drag the fibre continuously out of a PMMA reservoir through a thin tube. As the coated thread emerges it is wound directly onto a reel. If the thread is drawn out too slowly, its coating is smooth, but at a certain drawing speed and viscosity of solution, the coating becomes unstable and breaks down to form knots on the thread similar to those on wet spider silk.

’We can use the fluid-coating method to fabricate bioinspired fibres with periodic spindle-knots,’ says Zheng. ’In our mind, water collecting devices made of such bioinspired fibres include webs or tents.’ Although the study focuses on the fabrication process, the researchers did observe droplets of water combining into larger droplets around the knots on their threads. In a paper published earlier this year, they show that a 1.5mm long, 18?m thick PMMA coated fibre can collect 40nL of water from the air in 12 seconds - compared to 17nL for the same length of 2?m thick spider silk.2

Their approach to making bioinspired materials is interesting, says Jos? P?rez-Rigueiro, who studies spider silks at the Technical University of Madrid, Spain. ’Usually, bioinspired refers to materials made of proteins but these fibres are made of artificial polymers, so, in principle, the mechanical properties should be that of nylon,’ he says. He adds that the materials are cheap, so scaling up production shouldn’t be a problem.

Fog harvesting nets made from nylon and polypropylene are already used to collect water in mountainous, mist-enveloped regions of Chile and Peru. So what advantage could a bioinspired web offer? A recent comparison with ordinary nylon showed the unevenly coated threads collect larger drops.3Zheng thinks the way drops are driven towards the bumps makes the bioinspired fibres capable of performing more efficiently.