In looking for potential uses for highly water-repellent, superhydrophobic materials, scientists have mainly focused on obvious applications such as water-proof clothing and self-cleaning surfaces. But now US scientists have a new idea: using them to deliver drugs.

It turns out that superhydrophobic materials are very good at slowly releasing drugs over extended periods of time, from weeks to months. This is because the water-repellent properties of these materials arise from their rough, rippled surfaces, which trap air between the ripples. This trapped air prevents liquids such as water from penetrating the ripples, forcing it to remain perched on top as intact droplets.

Mark Grinstaff, professor of chemistry at Boston University, realised this trapped air could also be used to control the rate of drug release. The idea is that the trapped air prevents any drug loaded onto the superhydrophobic material from escaping, until the material is immersed in a liquid such as blood. Then, as the liquid slowly soaks into the material, it gradually displaces the air and releases the drug. More hydrophobic materials, which trap the air more securely, will release the drug over longer periods of time. 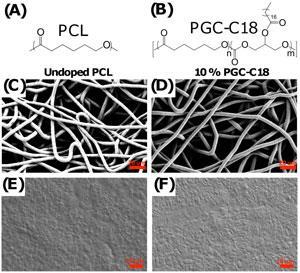 To demonstrate the potential of this technique, Grinstaff and his colleagues employed electrospinning, which uses an electrical charge to draw fibres from a liquid, to create hydrophobic meshes, just 300um thick, from polycaprolactone (PCL). By altering the concentration of a hydrophobic dopant - poly(glycerol monostearate-co-

-caprolactone) - they could control the hydrophobicity of the mesh and load it with a drug by adding it to the electrospinning solution.

Grinstaff is now assessing the efficacy of these meshes in mice and trying them with other drugs. ’There are several unmet clinical needs where this time frame of delivery would be important,’ Grinstaff tells Chemistry World. ’Pain management after lung surgery and prevention of lung tumour recurrence after surgical resection.’

This is not the first time that superhydrophobic materials have been used for drug delivery, says Nicola Tirelli, professor of polymers and biomaterials at the University of Manchester, UK, but it is the first time that air has been used to control drug release. ’The key point is the use of air for modulating the release of the drug,’ he says.