US scientists have made a nanoscale mass sensor which can weigh molecules with atomic precision.

Kenneth Jensen and colleagues at the University of California, Berkeley, made their device from a single double-walled carbon nanotube with an electrode attached to one end. Particles landing on the nanotube can be weighed because by adding mass they slow the frequency at which the tube vibrates.

The team tested their device by weighing atoms of gold, evaporated onto the nanotube. Their results show that the system is able to measure masses as small as two fifths of a gold atom (1.3 x 10-25  kg) over one second. 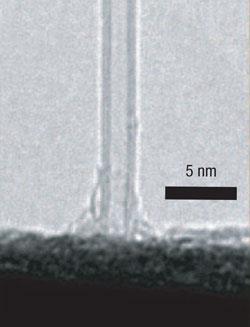 The idea of using resonators to measure mass is not new, and nanoscale mechanical resonators have been seen before. But researchers have previously focused on making them out of conventional materials such as silicon, says Jensen. ’By going from silicon to nanotubes we were able to make our resonator at least 1000 times smaller by volume. That was enough to improve the resolution to see single atoms,’ he says.

Its heightened sensitivity also means the resonator works at room temperature. ’Typically people have been trying to improve these devices by using them at lower and lower temperatures,’ Jensen adds. Operating at low temperatures can remove noise from a system but requires cumbersome cooling equipment.

While the resonator does not yet have the sensitivity of traditional mass spectrometers, Jensen points out that the system has certain advantages. The device can be used with neutral atoms or molecules, thereby avoiding destructive ionisation of samples such as proteins. Unlike mass spectrometers, the resonator also becomes more sensitive at higher mass ranges, making it more suitable for measuring large biomolecules like DNA. Finally the device is small enough so that, in time, it could be incorporated onto a chip.

Renato Zenobi, an expert on mass spectrometry at the Swiss Federal Institute of Technology (ETH) in Zurich is impressed by the sensitivity of the team’s device. But at the moment, he says, the team’s device needs to be calibrated using a transmission electron microscope, and would be difficult to fabricate on a large scale. While in theory, the device could be used for biomolecules, how well they will stick to the nanotube is unknown. ’And if you really wanted to apply the technique to biomolecules you’d still have to get them into the gas phase - probably by ionisation,’ Zenobi says.