Why cold is such a pain

We’d all like to avoid the sting of winter air and the agony of moving frozen fingers, though they’re crucial warnings of possible frost damage. Now scientists have discovered why extreme cold hurts, and created hardy mice who can stand painlessly on blocks of ice.

One primitive cold-tolerant ion channel keeps us smarting in the frost, say Peter Reeh of the University of Erlangen-Nuremberg, Germany, and colleagues. The discovery, along with the recent development of a drug which blocks the ion channel, could help treat people who feel freezing pains even at normal temperatures - a disorder called allodynia. 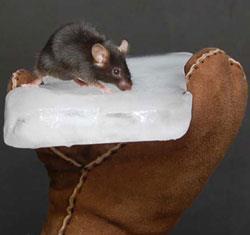 A mouse without the Nav1.8 ion channel remains calm and pain-free as it freezes on an ice plate

As Reeh explained, we feel pain when protein channels let sodium ions flow across the membranes of neurons, firing off electrical nerve impulses. The sodium channels - effectively molecular batteries - are charged up in turn by a front line of sensitive ion channels that directly open and close in response to heat, cold, chemicals, or sudden shocks.

Not all sodium ion channels are born equal; and one in particular, Nav1.8, seemed to be particularly useless for sensing pain. Though it is only found in the membranes of pain-sensing neurons, it is always beaten to the signal by its faster-working, lower threshold cousin, Nav1.7.

But in cold weather, Nav1.8 comes into its own. As Katharina Zimmermann at Erlangen University explained, delicate sodium channels are slowly inactivated as the temperature gets colder and the electrical resistance of the neuron cell membrane increases. Only the primitive Nav1.8 keeps transmitting a signal, Reeh’s team discovered, though even its function is slowed down slightly. 1

’Our work is one of the first giving Nav1.8 a good reason to exist. Without it, you wouldn’t feel a thing as your fingers and toes froze,’ Reeh said. He notes that cold-blooded animals, including amphibians, have many more Nav1.8 channels in their neurons than humans have.

’This is a remarkable piece of work, bringing together many sophisticated electrophysiological methods, and it explains how cold pain is encoded,’ Stephen Waxman, a neuroscientist at Yale University, US, told Chemistry World.

To back up their experiments, the Erlangen team cooperated with John Wood, of University College, London, UK, who created mice which lacked the Nav1.8 channel. When placed on ice, Reeh said the mice appeared to blow on their paws to warm them up; but their Nav1.7 channels were quickly desensitized. Without Nav1.8, they couldn’t feel the biting cold. Instead, they stood calmly on the ice, and might well have frozen solid if the researchers hadn’t removed them - a salutary warning that cold pain can be a good thing.

Because Nav1.8 is found exclusively in pain-sensing neurons, and not in muscle, it is a drug target predicted to stop pain with relatively few side effects, said Reeh. In May this year, US drug companies Abbott and Icagen announced a potent drug which blocked the ion channel in rats - a significant achievement, since it has proved hard to find selective drugs for the different ion channels. 2

It might seem that blocking Nav1.8 to stop pain is pointless, since Nav1.7 does the job anyway. But with Nav1.8’s cold-tolerance uncovered (the ion channel also appears to take over in inflamed skin), the hope is that people who suffer from cold allodynia, where biting pains are felt at normal temperatures, may benefit from having their cold-tolerant ion channels blocked.