US scientists have developed a way to produce a group of medically important plant compounds in yeast. They say their technique could be used to cheaply manufacture drugs including painkillers and new cancer treatments.

Kristy Hawkins and Christina Smolke of the California Institute of Technology (Caltech) in Pasadena introduced genes encoding plant and human enzymes into brewer’s yeast to produce benzylisoquinoline alkaloids (BIAs) - compounds from the same biosynthetic pathway as morphine and codeine - including the key intermediate reticuline. 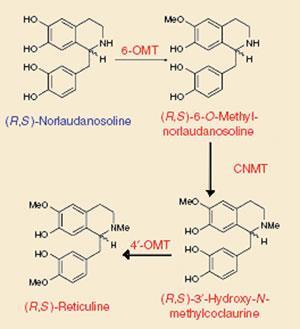 Smaller portions of the plant pathway have recently been reconstructed in bacteria, but Smolke thinks yeast represents a better host for this work. ’We felt that trying to reconstruct this pathway in yeast would actually work better than it might in bacteria, because, for example, a lot of these enzymes localise to membranes that the yeast would have but the bacteria don’t,’ she says.

To make reticuline, the researchers fed yeast a commercially available chemical called norlaudosoline, which mimics plants’ natural substrate, norclaurine. Three genes coding for methyltransferase enzymes were inserted to help the yeast convert norlaudosoline to reticuline. They also created strains to produce a variety of other BIAs, combining enzymes from different plant sources, including the opium poppy, and humans.

Smolke says their ’mix-and-match’ approach could lead to cheaper methods for manufacturing drugs like morphine - which currently has to be extracted from plants. Other BIAs, such as berberine, have already shown potential as anti-cancer therapeutics. Smolke believes the method will also   allow them to create BIAs that don’t occur in nature and may have novel activities.

Smolke’s team found a way to optimise the production of BIAs by fine-tuning the levels of their enzymes produced by the yeast. They placed one enzyme at a time under the control of a DNA sequence activated by galactose; adding more galactose increased the amount of enzyme produced. They then ’set’ the level of each enzyme at the optimum level by incorporating other DNA sequences that would induce production at the desired rates.

Smolke believes her tuning strategy could be used to optimise the scale-up of other chemicals made in yeast. ’This will become a tool that people will want to use, because often in order to make these processes commercially feasible, you need to have that sort of optimisation in place,’ she says.

David Leak, an expert in metabolic engineering at Imperial College London, UK, says the researchers have adopted a sensible approach to making genes and enzymes from different sources work together. ’It’s a complex task to get the right balance,’ he adds. ’At least they’re trying to get them to work in tandem by figuring out what level of expression gives them close to 100 per cent conversion.’