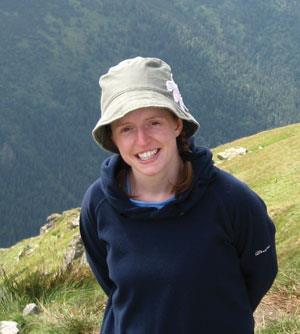 Zoe Schnepp is a lecturer in the School of Chemistry at the University of Birmingham in the UK. She is from the UK but has worked in the US, Germany and Japan. Research in the Schnepp group develops simple routes to functional materials. In particular, they use biomass to synthesise materials for applications, such as catalysis and water filtration.

Your work on jelly fuel cells gained a lot of interest. Why did it make such a nice story?

The main story with the jelly fuel cells is that you can use a very simple process and a cheap material to make a very complex nanomaterial that has lovely properties. In our case, this was a porous carbon made from a one-pot mixture of gelatin with iron and magnesium nitrates.1 Firstly, it turns out that drying metal nitrates and gelatin creates a foam, a little bit like cinder toffee. If we heat this foam in a furnace under nitrogen, the gelatin is carbonised to give a macroporous carbon network. At the same time, the iron and magnesium nitrates decompose to give iron carbide and magnesium oxide nanoparticles. These can be removed with dilute acid to give meso- and micropores. In this way, you can generate a material with many different types of porosity from a one-pot precursor. The nice thing about the gelatin is that it does all the hard work for you – it controls the formation of the foam and it also controls the formation of the nanoparticles.

Alternatively, you can leave the nanoparticles in the carbon foam and you have a nanocomposite containing some interesting catalytic nanomaterials. We’ve published this general method of making nanocomposites from single sol-gel precursors in ChemComm.2 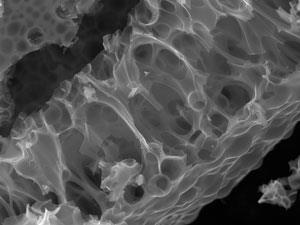 Meso- and micropores are created within the gelatin-based foam

What else have you been working on recently?

At the moment we’re doing some exciting work with sawdust. Jelly was obviously an amazing system. But rather than using something that is competing with a food product – obviously gelatin is used a lot in the food industry – we wanted to look at something that was purely a waste material.

We’ve also got a project where we’re trying to build a charcoal kiln to test if our chemistry works in that, as opposed to a standard laboratory furnace.

What’s the benefit of using a charcoal kiln?

Purely from the curiosity side of things. At the moment we’re using a nice nitrogen flushed, laboratory box furnace and we use that for most of our sample preparation. But people have been making charcoal in a similar way to what we're doing for millennia. They were carbonising biological materials, wood normally, in a sealed environment – they would let the wood burn in anoxic conditions. Our oven uses nitrogen but otherwise the conditions are quite similar so I’m curious if our more intricate chemistry, like the formation of iron carbide nanoparticles, will actually still work.

So is the idea to just have a less controlled environment?

Pretty much. And we’re also interested in idea of scaling it up. If it works in a much cheaper system then it has much wider potential.

Your research involves building functional nanomaterials from renewable resources. Why do you think this is such an important area of research?

I’ve always loved the concept of green chemistry and the concept of creating better chemistry that uses less energy, creates less waste or eliminates toxic components. I did a year in industry placement back when I was an undergraduate at DuPont and I worked with a scientist there who was very keen on green chemistry. You do still encounter some resistance and scepticism from some people in the chemical community thinking that Green Chemistry is maybe less ‘rigorous’. It’s a shame because I think it’s often more challenging and more exciting! You can’t just think about making molecules and materials with no thoughts about the impact these might have. You have to consider lots of other factors and this has led to some really clever new chemistry. This concept of being able to do something better, more sustainably, really appeals to me. I like the extra challenges it presents and I think collaborations will become increasingly important for overcoming these challenges.

So your jelly fuel cells were part of an international collaboration. How did that come about?

We met when we were postdocs together at NIMS [National Institute of Materials Science] in Japan. We were on a scheme called the International Centre for Young Scientists. You have a postdoc position, but it’s an independent one. Rather than having a boss, you have a mentor and you guide your own research and get your own research budget.

The four main authors on the paper all had quite different backgrounds and expertise, which was really what made the work so interesting. We were able to study the system from lots of different angles. The set-up of the international centre meant that we all met and got to know each other even though our science was quite different. We each still worked day-to-day within traditional research groups, where everyone had similar interests, but we had the more informal and social interaction with young scientists of very different backgrounds through the international centre.

Is that quite a rare situation?

Yes, they pride themselves on being quite unusual. You still have a mentor who guides you through the first steps of being an independent scientist but then you have the budget and the time to be as independent as you like. I’m now on an early career fellowship here in the UK where I am completely independent. Having that step between a normal postdoc and a fully independent position is a brilliant system.

Do you think we should be encouraging this type of set up here in the UK?

Absolutely, yes. It’s so difficult to get that first fellowship or lectureship position in the UK and anything that helps postdocs to make that step is fantastic. Obviously there are some postdoctoral fellowships available, which offer more independence, but it would be nice to see more of these types of position funded by institutions. The scheme I’m on at Birmingham is related. The ‘Birmingham Fellows’ were recruited across all disciplines and so we get to know young scientists from other schools. The most interesting research ideas I have are from talking with people outside of chemistry! It’s also nice to be funded directly by an institution since you know they are making an investment in you.

Having said all that, I think there is no substitute for going overseas for a few years. You learn so much and build up fantastic links that help you throughout your career.

Where does the next big science breakthrough need to happen?

I would say in energy. The work being done with artificial photosynthesis using semiconducting materials to split water or react water and carbon dioxide to make solar fuels is a fantastic concept. I would love to make a breakthrough in artificial photosynthesis. I think the biggest challenge is going to be getting this to work using safe and readily-available materials.

The international aspect. Even before I spent time working overseas. When I was at Bristol we had people from all over the world. Then when I was at the Max Planck we counted 41 different nationalities and then I moved to Japan. You end up with this fantastic network of friends all over the world and because you’re all in science you end up meeting up at conferences.

You’re speaking at the 3rd Royal Society of Chemistry Younger Members Symposium to be held at the University of Birmingham this June. What can young researchers gain from attending an event like this?

I think it’s firstly a great chance to think about your future. It’s never too early to think about the future and so you might get ideas from talking to people, or from hearing about work in another university about where to go next. I also think that learning about science that is unrelated to you is one of the best ways to get ideas about your own research. When you’re really early in your career it’s also a great way to think about your presentation skills and get ideas from what you see that works. Finally, it’s good on the CV. Whatever career you go into, getting involved in lots of different activities and events is the way you are going to impress an interview panel.