Are we giving chemicals bad names? 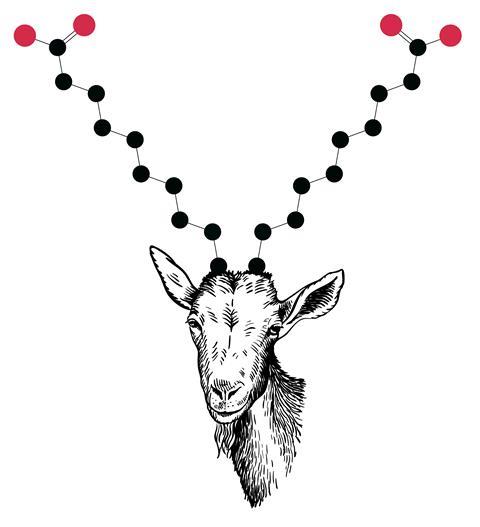 Capric acid by any other name would smell as goaty

Back in the distant past – that is, the early 1990s – I sat in a dusty lecture theatre, listening to an organic chemistry lecturer as he wrote on a blackboard that rotated in an enormous loop. At some point he mentioned capric acid. He didn’t draw the structure, and I didn’t ask because I was too busy scribbling things down.

Later I wanted to know the formula of capric acid. But by then I was in my student accommodation, away from the chemistry department where I might have found someone to ask. This was a time before widespread access to internet-connected computers. Smartphones and digital assistants were the stuff of science fiction.

The name wasn’t in my dictionary, nor the index of the few expensive textbooks I’d scraped together the funds to buy. So… I resigned myself to not knowing. ‘The past,’ as the writer L P Hartley said, ‘is a foreign country. They do things differently there.’

Further into the past, 250 years or so, things were, strangely enough, easier – there were only a few well-known chemical substances to learn. But in the late 1700s, things exploded (often literally, health and safety not being what it is today). Swathes of new compounds were being isolated and named with little in the way of a consistent system.

It was the French chemist, Louis-Bernard Guyton de Morveau, who first suggested some rules of nomenclature, mostly for acids, bases and salts. One of his key ideas was that the name of the substance should reflect its nature. If it’s an acid, say, it must have acid in its name. Seems obvious now, but it wasn’t at the time. For example, an old name for sulfuric acid is oil of vitriol, and nitric acid once went by aqua fortis (literally, ‘strong water’).

Although some decried de Morveau’s ideas as ‘barbarian, incomprehensible, and without etymology’ – reminds me of some of the Twitter arguments I’ve had – they were eventually accepted. But carbon-based chemistry was still a bit of a mess. By the middle of the 1800s, the number of known organic compounds was growing fast. They were often named based on starting materials, such as acetic acid from the Latin for vinegar, acetum, but as chemists synthesised more substances, ensuring names were at least unique was becoming difficult.

It was another French chemist, Auguste Laurent, who proposed naming compounds based on their longest hydrocarbon chain, and Charles Gerhardt who threw in the idea of homologous families, giving us alkenes, ketones, carboxylic acids and so on. Eventually this led to the Iupac rules we know today. Love them or hate them, they are useful — at least for simpler substances. Consider decanoic acid: the ‘dec’ bit indicates ten carbons, and ‘oic acid’ means it has COOH at the end. Easy!

Well, it would be, if people used it. But, like my lecturer, they still don’t. Decanoic acid is, yes, capric acid. The older name comes from the Latin for goat, ‘caper/capra,’ because it has a goaty smell. This etymology also gives us the astrological sign, Capricorn, which is the tenth sign – thus ten carbons in the chain. So obvious!

In fairness, if you understand the Latin root, the name is quite informative. After all, nothing about ‘decanoic acid’ suggests you’ll get a whiff of goat when you open the bottle.

And non-systematic names can be practical. Take glucose. We all know what it is; we probably learned its molecular formula at secondary school. (2R,3S,4R,5R)-2,3,4,5,6-Pentahydroxyhexanal, on the other hand – its systematic name – is rather less familiar. Okay, it tells us there are six carbons, five hydroxy groups and an aldehyde, but no one’s ever going to say that by choice.

Today, most chemists use a combination of ‘old’ and systematic names, everyone muddles along, and we might wonder if it even matters any more. Twenty-five years ago, deductive leaps of astrology-based logic aside, it was difficult to connect a non-systematic name to a substance. But now most of us have powerful computers in our pockets. ‘Hey Siri, what’s capric acid,’ gets you the answer in seconds. Learning how to name compounds systematically is starting to feel like memorising the periodic table – a nice party trick, but useful? Not especially.

Plus, it’s been centuries and chemists still won’t give up non-systematic names. Outside of school chemistry lessons, I’m as likely to find a chemist who calls acetic acid ethanoic acid as I am to see a red squirrel colluding with a rabbit. It could happen. It’s unlikely.

Maybe it’s time we gave up and just taught the old names in schools? They’re more interesting, invariably shorter and, if you don’t recognise something, these days you can ask your digital assistant.