Until recently, I really enjoyed flying. I love to travel, and flying allowed me to explore the world with ease. The rise of budget airlines and new airports meant that no destination felt out of reach. Flying seemed essential to my career too, as I travelled to conferences and made valuable face-to-face contacts. 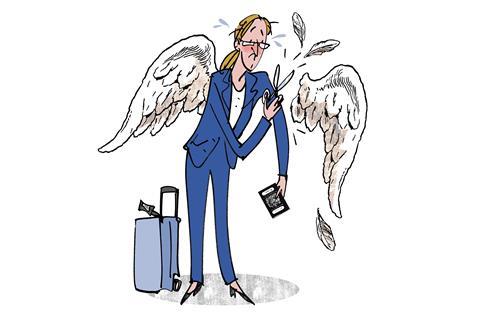 Reduce your carbon footprint by keeping your feet on the ground

However, flying has a hidden cost which goes largely unnoticed: its role in global warming. The airline industry contributes about 3% of the CO₂ released by human activity, and planes also emit more potent greenhouse gases, such as water vapour and nitrogen oxides. If the aviation industry were a country it would be the seventh highest emitter of CO₂ globally. On top of this, the contrails that form from plane exhausts leave white streaks in the sky that induce high-altitude cirrus clouds. These trap more heat in the atmosphere than the total CO₂ produced by planes.

Flying uses by far the most energy per hour compared to any other form of transport. The aviation industry pays no tax on jet fuel, which is effectively a subsidy. This helps to drive the industry’s rapid growth – and its emissions, which are set to more than triple by 2050. This is happening at a time when the world’s scientists say emissions need to plummet if devastating climate change is to be avoided.

I decided I had to stop flying.

Yet I was still worried about how my decision would affect my life, including my career. So I found 10 other academics, from professors to PhD students, who had also taken this decision and asked them about life taking significantly fewer flights – or in some cases, having stopped flying altogether.

Every one of them said they made their choice because of climate change. They wanted to reduce their personal emissions, and encourage others to do the same. Family matters particularly influenced two of the people I talked to: one told me that ‘in 2012 I was sitting on a plane … [and] I felt like I was stealing the future from my children.’

I asked them about the obstacles they had encountered in their effort to avoid air travel. The main problems they mentioned were the expectations placed on them to travel for work and to visit family, and some feared missing out on holidays and career development opportunities. Another common thread was the sheer complexity, impracticality and higher cost of choosing other forms of travel.

On the other hand, many of the people I spoke to have encountered some surprising advantages to flying less. The joys of train travel were a common theme – one that struck a chord with me. It’s easier to work on a train journey; an academic I spoke to described a rail trip from Wales to Bavaria as ‘the ultimate luxury in time’. Others felt they had more integrity, less guilt and were less stressed as a result of not flying. Part of this was down to having more time to spend with their families. For an associate professor based in Canada ‘less flying to faraway places has unexpectedly allowed me to … keep pace with everyday life’.

Despite the positive reasons for not flying, there is a powerful and persistent counter-argument that such personal action is pointless: global systemic changes are needed to tackle climate change, so one person giving up flying will make no difference at all.

Giving up flying does more than reduce my carbon footprint; it also increases awareness. In a culture where individual interests are considered important above all else, stopping flying sends a strong social signal that leads others to take note – precisely because it is a ‘difficult’ thing to do.

The choice to forgo flying is challenging, but it’s not without its upsides for the climate and your own wellbeing. An increasing number of people are deciding to join me by staying grounded and that, at least, gives me hope.

I would like to thank Steve Westlake for researching and contributing the facts on the aviation industry’s impact on global warming to the first part of this article. I would also like to thank Peter Kalmus, Jenny Baker, Ryan Katz and the other interviewees who have asked to remain anonymous for sharing their thoughts.